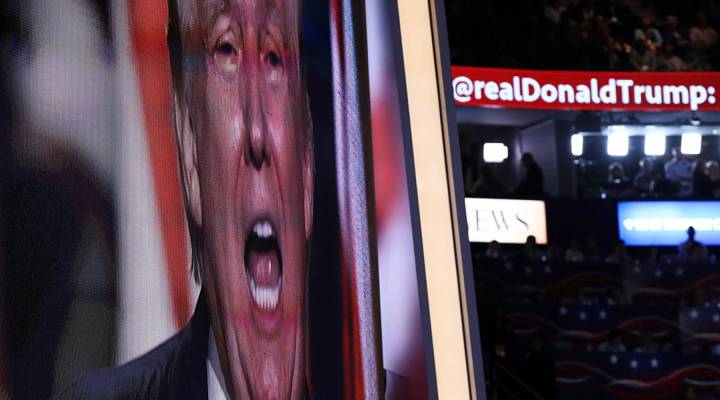 COPY
A screen displays Republican presidential candidate Donald Trump delivering his speech during the evening session on the fourth day of the Republican National Convention on July 21, 2016 at the Quicken Loans Arena in Cleveland, Ohio. Win McNamee/Getty Images

A screen displays Republican presidential candidate Donald Trump delivering his speech during the evening session on the fourth day of the Republican National Convention on July 21, 2016 at the Quicken Loans Arena in Cleveland, Ohio. Win McNamee/Getty Images
Listen Now

Hillary Clinton and super PACs supporting her have budgeted $100 million for TV ads between now and the November election.  That’s around $97 million more than Donald Trump and his super PACs have set aside for TV ads. According to the Center for Responsive Politics.

“It’s such a stark difference that it’s hard to believe that they’re real,” said Sarah Bryner, the center’s research director.

But numbers don’t lie.  And here are some others.  The Trump campaign reported raising around $80 million last month.  Now that he’s sitting on a pile of cash, will Trump finally break into TV? We don’t know. The Trump campaign didn’t respond to our interview requests.

But even if Trump decides to jump into TV now, he may not get the ad slots he wants.

“If the time slots are gone, they’re gone,” said David Caputo, professor of Political Science at Pace University. “So that’s the disadvantage of being late.”

By now, other candidates have already snapped up prime time slots. Why?  Because TV works.

“The fact that the electorate tends to skew a little bit older,” said Steve Passwaiter, vice president and general manager at Kantar Media CMAG, which tracks campaign spending. “I think that also helps TV a lot.”

Because those older, reliable voters, still tune in to TV. Passwaiter said politicians also like to run ads during big events like the Olympics, which everyone watches.

So far Trump has relied on social media and free media, and he could keep doing that.

But Passwaiter couldn’t think of any modern candidate who’s won the presidential race without hitting the TV airwaves. Hard.