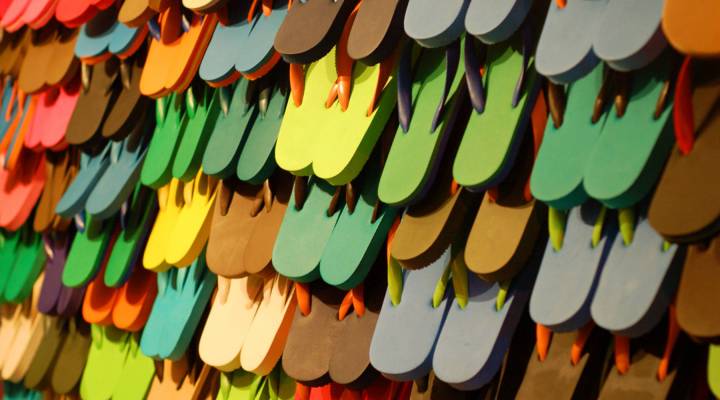 COPY
The classic, inexpensive summer shoe got its start centuries ago. Glenn Brown/Flickr via Creative Commons
Brought to You By

Last year, Americans spent $2.6 billion on arguably the most popular shoe of summertime – the flip-flop.

“They are probably the oldest form of footwear,” said Tamera Lyndsay, founder of The Shoe College in Arizona.

Flip-flops date back to ancient Egypt, around 4000 B.C, Lyndsay said. But multiple cultures have put their own twist on the sandals. For example, instead of placing the strap after the first big toe, “the Romans used the second toe, the Mesopotamians the third toe,” she said.

As for the modern-day flip-flop, its origins trace back to Japan, said Elizabeth Semmelhack, curator of the Bata Shoe Museum in Toronto.

During World War II, Japan was big into rubber production. It took over rubber tree plantations across Southeast Asia.

“Obviously, they lose the rubber regions after the war, but the industry itself was still viable,” Semmelhack said.

In the 1950s, Japan began shipping rubber flip-flops to the U.S. as one of its earliest exports after the war. They were marketed as Zoris, Japanese thongs typically made of straw.

“It’s interesting that Americans were willing to consume footwear that was so clearly linked to a recent enemy state,” Semmelhack noted.

The earliest flip-flop adopters were mostly American housewives “who would wear a pair of rubber thongs in the shower, maybe puttering around the house.”

Then, in the late 1990s, the humble poolside shoe became trendy. Havaianas, a Brazilian-based company, helped make that happen with splashy and sparkly styles.

“Our cheapest model sells for $18 and then we have all the way to above $100,” said U.S. president Marcio Moura.

The global company produces about 220 million pairs of flip-flops a year.

Diane Shader Smith, a publicist in LA, has her share. At her home in Los Angeles, she showed off her impressive flip-flop collection.

“Your shoes reflect your personality, and the flip-flop reflects mine,” she said.

Shader Smith wears flip-flops every day. Every day. Basic ones to the store, shinier ones for meetings with high-end clients and bejeweled flip-flops for weddings.

“This is my most expensive pair, it’s from Neiman Marcus,” she said, as she picked up a leather flip-flop adorned with abalone shells. “It’s $400.”

Meanwhile, her cheapest pair was on sale for $15.

“Oh, I am so not a fan of flip-flops,” said Squid Vicious, a 39-year-old man from Oregon City (Squid Vicious is his online persona).

His hatred of flip-flops drove him to create a Facebook group and website where haters can unite.

“We’ve almost come together like a community,” he said.

It’s the sound that irritates him most.

“It’s like in a scary movie when the music changes and you’re like ‘Okay, well, something bad is going to happen,’” he explained.

The term “flip-flop” was coined in the ‘60s, and it was based, surprisingly enough, on that very slapping sound only they can make.