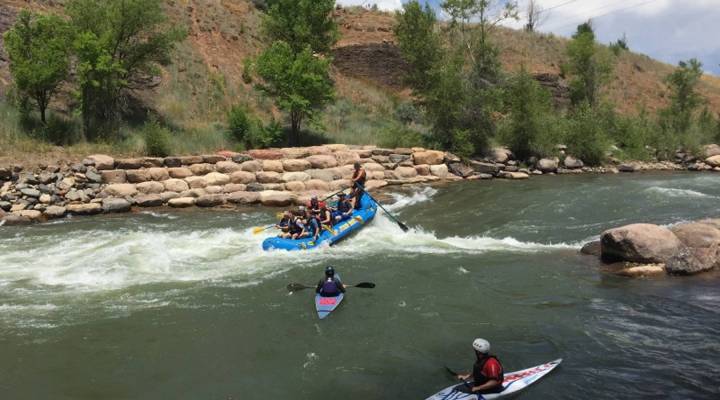 COPY
The 2016 rafting season has been strong in Durango, Colo. Flash back one year ago though and this riverfront looked different. Companies were forced to cancel trips for eight days after an EPA-triggered spill of mining waste into the Animas River. Grace Hood, Colorado Public Radio

The 2016 rafting season has been strong in Durango, Colo. Flash back one year ago though and this riverfront looked different. Companies were forced to cancel trips for eight days after an EPA-triggered spill of mining waste into the Animas River. Grace Hood, Colorado Public Radio
Listen Now

In Colorado, nothing quite says summer like a rafting trip down thrilling rapids. In the southwestern town of Durango, hundreds sign up for trips in July and August.

On a late June afternoon, Dylan and Elizabeth Burton from Washington stepped out from the Animas River in Durango riding a rush of adrenaline. “Perfect, beautiful, fantastic in every way possible,” Dylan Burton said.

Flash back one year ago though, and this riverfront looked very different. The county government shut it down after the Environmental Protection Agency accidentally spilled wastewater 50 miles upstream. The three million gallons of orange-yellow wastewater fouled rivers in three states and the Navajo Nation. It stemmed from work at the historic Gold King Mine deep in the San Juan Mountains.

Cities and farmers scrambled to turn off water intake valves. Ultimately the river was off limits to rafters, farmers—everybody—for eight days.

The Animas River in Durango, Colorado Aug. 8, 2015. Local government officials shut down the river for eight days after the EPA accidentally triggered a spill at the Gold King Mine 50 miles upstream.

One year later, a federal criminal investigation into the spill is underway. At the local level, governments and businesses are frustrated with the slow pace of compensation from the EPA.

Matt Wilson, owner and operator of 4 Corners Whitewater, estimates he lost about $30,000 in revenue last year because of the spill. His was one of about six Colorado rafting companies affected. He says canceled trips and no customers for over a week caused a big disruption. “So after that it was hard to kind of reboot and get people back on the water after all that publicity,” he said.

Wilson’s company is one of 68 businesses across Colorado, New Mexico, Utah and the Navajo Nation that filled out financial claims with the EPA. Water quality on the Animas River has returned to pre-spill conditions. And the 2016 summer rafting season has been strong.

But one year later, Wilson and others are still waiting to hear back on their claims.

A few miles away at Durango city hall, counselor Dean Brookie said his government is in another type of holding pattern. It spent $445,000 responding to the spill. The tab includes everything from water-quality monitoring to “personnel that we assigned to the clean-up effort.”

Brookie said the EPA has paid about $45,000 so far. Durango’s budget is holding strong without those remaining funds. But other smaller communities may not have as much in reserves.

Laura Jenkins with the EPA said the agency continues to work with local governments.

“We’re limited by what the regulations allow us to reimburse communities for,” Jenkins said. “So they have to meet the requirements that are in the statutes.”

The EPA says laws like the Clean Water Act govern what’s reimbursable for communities. Overall it’s spent $29 million responding to the spill, with $3.7 million going to local governments to reimburse expenses like overtime pay and local water quality monitoring. But there are other things that aren’t covered.

In some places like New Mexico, talks have broken down.

New Mexico sued the EPA this spring. She said the state received more than $1 million. But it only covers a fraction of $130 million in estimated damages. The lawsuit covers everything from water quality monitoring to payment to local businesses for their losses.

“It’s our experience that the EPA met all these requests with either challenges, resistance or delays,” she said about local business owners, frustrated with the claims process.

Other governments are following New Mexico’s path to court. The Navajo Nation filed suit against the EPA earlier this month.