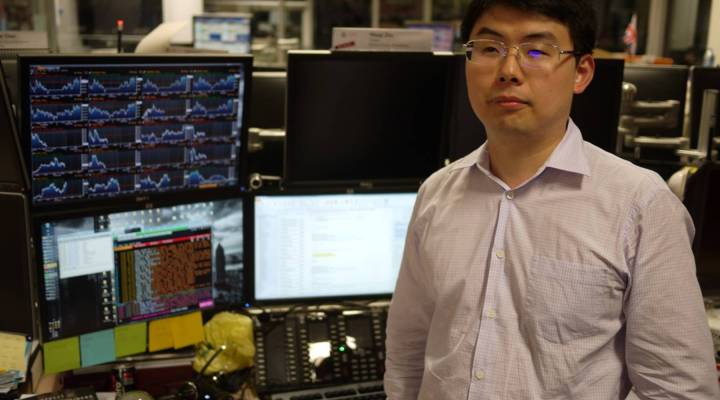 COPY
Weiqi Zhu stands in front of his trading terminal at a major bank in Hong Kong. The 29-year-old lost his father during the demolition of his Shanghai neighborhood. Rob Schmitz/Marketplace
The Street of Eternal Happiness

Weiqi Zhu stands in front of his trading terminal at a major bank in Hong Kong. The 29-year-old lost his father during the demolition of his Shanghai neighborhood. Rob Schmitz/Marketplace
Listen Now

SHANGHAI – I moved to an apartment complex in 2010 named The Summit. It’s made up of 8 high rises surrounding a green courtyard where my children play. It was built a decade ago, along the Street of Eternal Happiness. Once I asked a neighbor what used to be on this land – “just a bunch of old, run-down hovels,” he said with a swipe of his hand.

Later, when a historian showed me an old browned map of the neighborhood from the 1940s, I noticed a maze of alleyways snaking south from the Street of Eternal Happiness down through dense rows of tiny residential plots where my high-rise apartment building now stood. I peered closer and counted well over a hundred structures inside one square block. I thought about the hundreds of families who had lived where my family now slept. Where did they go?

Seniors in the old alleyway homes across the street all pointed me to a woman named “Xi”. The day I met Xi Guozhen, she had just stepped off a train from Beijing, where she was released from detention center that very morning. For twenty years, the 61-year-old has petitioned China’s government to investigate the death of her husband. He died when developers came to demolish his home to make way for the high rise where I live. Ever since, his widow’s routine is predictable: she pleads for justice outside Zhongnanhai, the central headquarters of China’s Communist Party along Tian’anmen Square in Beijing, she’s tackled by police, and she’s detained. “One time I spent fourteen days there, one time, 38 days, and this time, six days. Whenever they let me out, I go straight back to Zhongnanhai.”

Her life is on repeat.

Before my complex was built, Xi and her husband Zhu Jianzhong owned an apartment on the second floor of a house, where they lived with their son. In 1992, the Xuhui district government of Shanghai sold their neighborhood to a developer owned by Li-Ka Shing, the richest man in Asia. The developer gave residents apartments in a faraway suburb in return for leaving their homes.

Xi and her husband refused.

“One day at around eight in the morning, I was returning from the market when six of the developer’s thugs tackled me outside my home and pushed me into a car,” remembers Xi.

Several others, she says, climbed a ladder to her balcony. Xi says she screamed for her husband, but it was too late. There was a scuffle inside, and then black smoke poured out of their balcony window before the house went up in flames. Xi’s husband burned to death, and the developer’s men escaped.

The developer said Xi’s husband set himself on fire. “My theory is that they beat him up badly,” says Xi. “In China, if you injure someone in a situation like this, you have to pay more in compensation than if he died. I think they burned him to death to avoid the cost.”

After the fire, Xi was taken to a hotel and locked in a dark room. In the evening, a tall man from the demolition crew opened the door. “He said, ‘It took seconds for your husband to die.’ ”

Xi screamed at the man, accusing his crew of murdering some- one like them: a common person, a laobaixing.

“Then he interrupted me,” she said, “and he asked me, ‘Does your family have a special background? Are you friends with any- one in the Party? Killing a laobaixing is like killing an ant.’ ”

Ten years later, in 2006, the man in charge of the demolition crew that confronted Xi’s husband, Yang Sunqin, was sentenced to death by a Shanghai court for burning an elderly couple to death across the street from Xi’s former home during the demolition of that neighborhood, known as Maggie Lane.

Xi and Zhu’s son Weiqi was just 10 years old when his father burned to death. That day, police escorted the boy from school to a government-owned motel, where he was detained with his mother for the next year and a half. “When he learned his father died, he kept hitting the wall, until his hands started bleeding,” remembers Xi. “He wouldn’t stop. That’s when he stopped talking.”

I didn’t recognize the name, so she said it again: Kang Nai Er. I repeated it a few times, waiting for the phonological synapse to fire, and then it hit me: Cornell.

Weiqi Zhu is 29 years old and he works inside Hong Kong’s second-tallest skyscraper. When he’s not finishing his doctoral thesis in finance, he trades derivatives for one of the world’s largest banks. What he’s accomplished in the 19 years since his father’s death is just as impressive as his country’s incredible development during the same period. Zhu thanks his father for his success. “He was a really, really good father,” says Zhu. “On the other hand, he is really a good teacher. I think he is like the father in ‘Growing Pains.’”

The 1980s sitcom was popular a decade later in China. He and his father watched it religiously. Zhu told me that growing up in his quiet lane off the Street of Eternal Happiness was like being brought up in a village. Your entire life unfolded within two blocks where everyone knew everything about your family. He was eight years old when he first left this nest. It was 1994 and Shanghai’s first subway line had just opened. A station had appeared just a block away. For Zhu, a single word summed up his memory of that first ride: “People,” he said. “I had never seen that many people before in one small space.”

After his father died, Zhu turned inward – he spent his time studying and trying to blend-in. “I tried a lot to hide what happened to my family,” he says.

His mother did the opposite.

During his teenage years, she was constantly getting arrested in Beijing, leaving him in their tiny apartment, alone. Zhu says this never bothered him. He’s always believed her quest for justice is right. “If I were against it, I think she would be in a much, much tougher situation, because then no one in this entire world understand her,” he says.

Zhu has only returned to his old neighborhood once. It’s now full of expatriates and European restaurants, reminiscent of a time before the Chinese united under Communism to expel Shanghai’s foreign occupiers; a time when the neighborhood was run by the French. “It’s kind of sad,” Zhu says. “There are so many foreigners right now who live there.”

I’m one of those foreigners. I tuck my children into bed above the spot Zhu’s father used to tuck him in at night. I watch my children play where his father used to watch him play. Zhu says his father’s death taught him that however bad things seem, things could always be worse. Since then, he’s always stayed calm under pressure, a trait that’s helped him in the high-stakes world of derivatives trading.

One night when he was in middle school, the police came to his door. He was home alone. His mother had been gone to Beijing for weeks to petition the government again. He had just cooked himself some noodles. “First, they tried to knock on the door and I asked ‘who are you?’ Then they said ‘the policemen.’ I told them that my mother was not there. They said ‘Yes, she was not there because she’s detained and we need a signature.’ And I just refused to open the door.

The police smashed through the door, ripping it off its hinges. They handed a startled Zhu a document stating his mother was in prison in Beijing. He refused to sign it. The officers stormed off, leaving the boy inside an apartment without a door. At 14 years old, Zhu had lost his father, his home, and now his mother would be away for a while, too. Hardly anything scared him anymore. He stepped over the splintered mess, and walked down to the street where he found a handyman.

A new door was in place before he tucked himself into bed that evening.