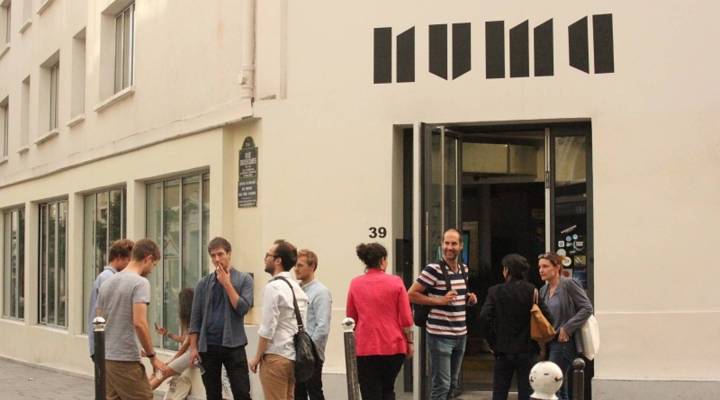 On the ground floor of the Parisian co-working space called NUMA every chair is occupied by someone with a laptop. Some days, people sit on the floor, noted Frederic Oru, the center’s International Director.

“Usually at 9 o’clock when we open in the morning,” he said. “People are queuing.”

Located close to the center of the city, NUMA is one of the hubs of Paris’ startup scene, with free co-working on the first floor and four more floors for companies and participants in different programming. The center hosts some 600 events a year.

Oru said Paris’ tech scene has matured and grown, attracting international talent, as he can see in applications for the accelerator program for startups.

“Out of these 2,000 applications, 20 percent come from international, from abroad, and it’s increasing, definitely,” he said.

Given all of this, there has of course been some conversation about what Brexit could mean for the local tech scene – as well as the financial sector.

No sooner had surprise about the Brexit vote abated in Europe their major cities began looking for way to attract some of the jobs expected to relocate as a result of the U.K.’s planned separation from the European Union. We’ve already looked and Germany, and another one of those contenders is likely to be France, where the head of the Paris region has sent out hundreds of letters to executives in Britain. While much has been made of relocating positions from major banks, the city’s startup scene could also attract talent.

But France has some things to overcome – including a reputation for high taxes.

That reputation led former Prime Minister David Cameron to joke after one new tax proposal a few years ago that maybe French people would like to come to England.

“We will roll out the red carpet and welcome more French businesses to Britain and they can pay taxes in Britain,” he said, a comment that’s brought up a lot these days by people like Marc Fournier, who are advocating for France to seize this opportunity now to lure businesses in the other direction.

“I think there’s a good communications program that needs to be put in place in the same way,” said Fournier, a managing partner at venture firm Serena Capital in Paris who also teaches at business school ESCP Europe.

“I sit on boards in London,” he added, “and all of the investors in London are now curious into finding out what’s happening in continental Europe.”

French politicians have made it clear they think Paris should be a strong competitor for any business activity leaving London. “Welcome to Paris,” was the message from Prime Minister Manuel Valls earlier this month announcing the government would set up a one-stop office to smooth the way for relocating employees. It will go as far as helping people find schools for their kids.

“Politicians will get the press coverage,” said Fournier, but “good French and successful entrepreneurs in Paris need to communicate on all the strengths that are here in Paris.”

Josephine Goube, who is French but lives in London, where she works for the cross-European tech recruitment site YBorder, said many fear this could appear “vulgaire,” or vulgar.

“Certain companies see this as an opportunity but they don’t want to appear opportunistic calling up people in difficulty,” she explained.

Goube, who also advises the European Commission, said  France will be a contender but that outside of visa programs, the government’s role in people’s decisions will be relatively limited. Ultimately, people who do decide to relocate will make the decision for themselves based on all sorts of personal reasons like language and cultural ties, she said.

Goube also cautions there may not be as many jobs up for grabs as people thought right after the Brexit vote – at least not yet.

“I think now that the dust has settled a lot of people more a little bit more less emotional more rational and really looking at ways they can relocate or not,” she said.

Oru, of NUMA,  agreed it will take time to see how many eventually do cross the English Channel. In a year, he said, once European countries have worked out their new rules, particularly on the movement of people, then real relocation trends could become apparent.  And while the expense of life in Paris will of course be a consideration for those looking at Paris, Oru said that for companies, the engineering talent could be worth the cost.

And he joked that new entrepreneurs “ don’t need a lot of things. Basically noodles and a bed to sleep.”