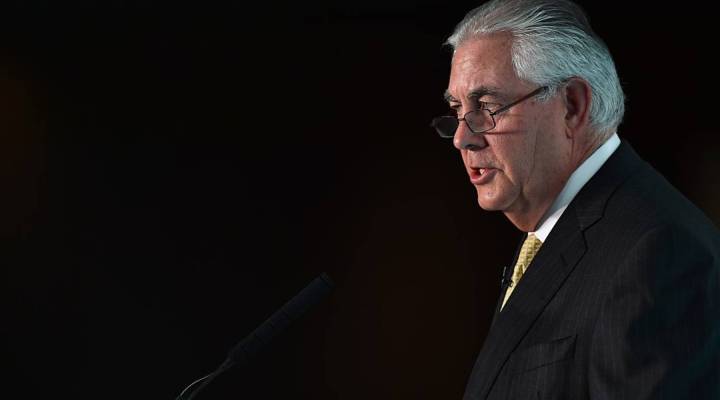 COPY
Chairman and CEO of US oil and gas corporation ExxonMobil, Rex Tillerson, speaks during the 2015 Oil and Money conference in central London on October 7, 2015. BEN STANSALL/AFP/Getty Images

Chairman and CEO of US oil and gas corporation ExxonMobil, Rex Tillerson, speaks during the 2015 Oil and Money conference in central London on October 7, 2015. BEN STANSALL/AFP/Getty Images
Listen Now

ExxonMobil said its second quarter earnings were 60 percent lower than a year before, hitting a level not seen since Exxon and Mobil joined together in 1999.

Continued low oil prices made the company’s revenue from upstream well operations take a big hit. Downstream refining into gasoline and other products had benefitted from cheap oil prices for a long time, but a growing glut of those products shrank margins for the company’s overseas market.

“More than 70 percent of its earnings for the last six months have come, not from producing oil and gas, and not from refining or selling fuel, but from making petrochemicals,” Molchanov said.

That integration has helped the company avoid many of the losses seen by other companies that rely heavily on oil production.

“Because Exxon is such a big player in chemicals and refining, its earnings did not fall off a cliff to the extent that many other oil companies’ earnings fell off a cliff,” Molchanov said.

Independent energy economist Philip Verleger said another thing that has spared ExxonMobil from major drops was not pushing expansion when oil’s price was high.

”ExxonMobil maintained a cost discipline, and it didn’t chase the high-cost rigs and the other high-cost operations, and so their cost of operations have always been much lower,” Verleger said.

”In some ways, if prices remain low for some time to come, as I expect them, it will be good for Exxon, because other companies will essentially have to cut back, and assets will become available cheaply, and Exxon will be able to expand, sticking to its cost discipline,” Verleger said.

Molchanov, however, expects oil prices to rise and said the company’s diversified business plan means it will be less able to make quick gains if oil prices do jump. The refining of petrochemical businesses have been a hedge against falling oil prices. When prices reverse, those businesses lose their advantage.

“What had been a hedge for a sort of protection for Exxon is likely to turn into a headwind as oil recovers,” Molchanov said.

“Raymond James’ forecast is for oil in the 60s by the end of the year,” he said. “Exxon stands out as one of the least attractive ways for investors to play that recovery.”