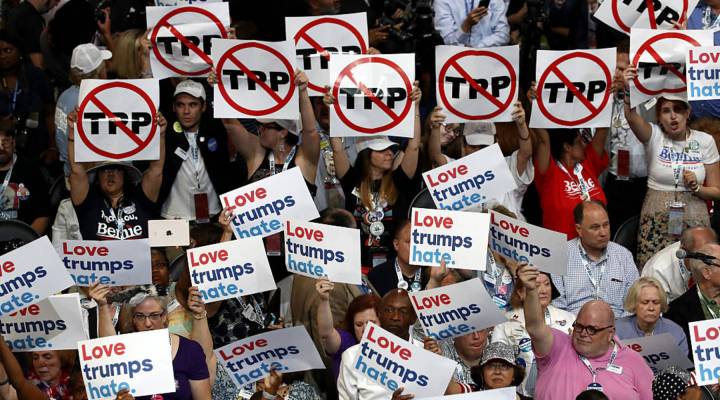 COPY
elegates hold up signs that read 'Trans-Pacific Partnership (TPP)' and 'Love trumps hate' during the opening of the first day of the Democratic National Convention at the Wells Fargo Center, July 25, 2016 in Philadelphia, Pennsylvania. Win McNamee/Getty Images

elegates hold up signs that read 'Trans-Pacific Partnership (TPP)' and 'Love trumps hate' during the opening of the first day of the Democratic National Convention at the Wells Fargo Center, July 25, 2016 in Philadelphia, Pennsylvania. Win McNamee/Getty Images
Listen Now

The pending Trans-Pacific Partnership (TPP) agreement would change trade rules to facilitate the flow of goods and investment among the U.S. and 1 other countries, which collectively control 40 percent of the global economy. After years of negotiations, the deal was finished in October 2015, but it still needs to be ratified by Congress to take effect. TPP is thousands of pages long, covering labor, tariffs, the environment, e-commerce, intellectual property, and many other issues.

TPP and related debates over free-trade, outsourcing and protectionism have become hotly-contested election issues for both Democrats and Republicans.

President Obama faced heckling and delegates waving anti-TPP signs during his keynote speech at the Democratic convention. He’s popular with Democrats, but by continuing to push TPP in Congress, he backs an increasingly unpopular trade deal, which Hillary Clinton once supported and now says she opposes.

The same rising sentiment against free-trade can be found far from the conventions. Rancher Neal Slater, 60, raises cattle and trains horses near Goldendale, Washington, in the high dry prairie country east of the Cascade Mountains, where his family has worked the land for four generation. Slater also volunteers at a summer rodeo bible camp at the fairgrounds in town, teaching rodeo skills to teens.

Rancher and horse-trainer Neal Slater volunteers to teach teens at a summer rodeo bible camp in Goldendale, Washington. He supports Republican Donald Trump for president, in part because of Trump’s opposition to TPP and other trade deals.

“I coach the team-roping, and we’ve got calf-ropers, goat-tying, barrel racing, bull-riding, saddle-bronc, and barebacks,” said Slater, who himself competed as a young man. “It seems like we get a kid turned around every year, down the right path—it’s all worth it.”

Slater’s a pro-business, small-government Republican who originally supported Ted Cruz, and now supports Donald Trump, in part because of his stance against TPP and previous trade deals like NAFTA.

“I would have to agree with Trump—free trade is one thing but fair trade is something different,” said Slater. “And free trade has really hurt us in terms of the wheat industry and the cattle industry. I think if we could get to fair trade, it’ll really help. Because the basis of our whole economy is our ag industry—mining, lumber, agriculture, cattle, wheat. If it doesn’t do well, then the economy doesn’t do well.”

Teens are taught horse-handling and roping skills at summer rodeo bible camp at the public fairgrounds in Goldendale, Washington.

In Portland, Oregon, 22-year-old yoga instructor and model Larissa Joncus is a diehard Bernie Sanders supporter. She was tireless during the Democratic primaries, phone-banking, flyering and organizing events for the democratic socialist candidate. She isn’t ready to back Hillary Clinton in November: she doesn’t trust her, and doesn’t believe her conversion on free-trade is genuine.

“I’m sure there are good things she could do,” said Joncus. “I’m just concerned about the bad things, like the TPP or regime-change.”

In 2016, though, the anti-free-trade rhetoric has captured the main body of Republican voters behind Donald Trump, and the large bloc of Democratic voters backing Bernie Sanders.

Economist Robert Scott at the Economic Policy Institute said the increasing visibility of international trade issues in national politics is partly a result of the two-decade-plus legacy of NAFTA, which he said many voters blame for job-losses and industry displacement in their regions.

“Often we find that we have growing trade deficits with our partners in these deals,” said Scott. “They are designed to encourage outsourcing of production–so we tend to see our imports increasing more than our exports. This also tends to put downward pressure on wages. So it hurts essentially all non-college-educated workers, who make up about two-thirds of the labor force.”

Scott said that with a weak economic recovery and a presidential election looming, a lot of attention is now focused on jobs and wages. And he said voters are asking whether trade deals touted by mainstream leaders of both poliitcal parties have made matters worse.