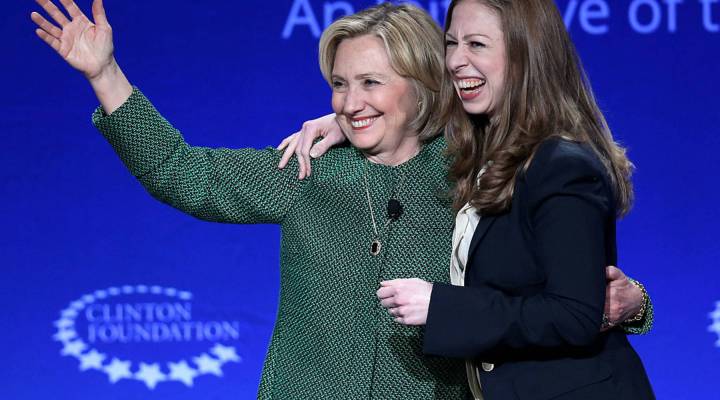 Presidential nominee Hillary Rodham Clinton and her daughter Chelsea Clinton, the vice chair of the Clinton Foundation embrace as they attend the 2015 Meeting of Clinton Global Initiative University at the University of Miami on March 7.  Joe Raedle/Getty Images

Presidential nominee Hillary Rodham Clinton and her daughter Chelsea Clinton, the vice chair of the Clinton Foundation embrace as they attend the 2015 Meeting of Clinton Global Initiative University at the University of Miami on March 7.  Joe Raedle/Getty Images

Chelsea Clinton will introduce her mother, presidential nominee Hillary Clinton, tonight and her public presence in the campaign has inspired lots of speculation over what will happen if she reprises her role as “first daughter.”

Hillary’s advisers told The New York Times that Chelsea’s role has “not been given much thought,” but she would likely “lend a hand around major events and holidays, at least by phone and email, and to help her father with some of the traditional duties of a president’s spouse.”

The role of the presidential spouse has changed over time, but it historically relates to social duties. Many speculate Bill Clinton won’t take up mantle, but will Chelsea? At this point, only one thing is for sure: she’s got a family of her own now, and she won’t be moving back into the White House.

But if she could very well take on first lady-like responsibilities in the new administration, said Barbara Perry, director of presidential studies at the University of Virginia’s Miller Center. While Bill might speak at a lunch or do the occasional photo opp, Perry said she thinks Chelsea would be well-suited for more involved meet-and-greets, or events.

“She’s capable of taking on that role if she wants it,” Perry said. “I think she’s been groomed for that, I think she’s been groomed her whole life for a public position. With her background at the (Clinton) Foundation and her stellar education — she’s has a lot of the qualities in a person taking on that role. First daughters have done this before, going all the way back to Thomas Jefferson because he was a widower.”

Perry said Chelsea could emulate her mother as a first lady. Hillary Clinton fulfilled her traditional duties while also pushing for health care reform, and Chelsea’s work at her family’s nonprofit and her education show an interest in global health and women’s issues. But it is also likely Chelsea will learn from the public scrutiny cast on Hillary while she was first lady. For one, the public thought she played too active a role in policy-making.

Justin Holmes, assistant professor of political science at the University of Northern Iowa, said Chelsea has had more public presence than other children who were raised in the White House, so she could take on the first lady role and evolve it.

“There is really nothing that says that position has to do anything,” Holmes said. “Therefore there isn’t really much that has to be covered if there weren’t a first lady, or Bill was non-traditional in that role. So, Chelsea seems like someone who would be capable, but were she to step into a fairly public role in her mother’s administration, it would be a pretty big break from the past.”

If Chelsea does choose to take an active role in her mother’s administration, it may indicate she has even greater ambitions, said Daniel Smith, assistant professor of government at Harvard University.

Historically, women are more likely to be part of a political dynasty, he said. In the current Congress, for example, 10 percent of women are dynastic compared to 5 percent of men. In earlier decades, these women were mostly the wives of former politicians who had died, taking over their husbands’ roles in what’s called “widow’s succession.” Now, it’s more common to see the daughters of politicians entering the fray, Smith said, and Chelsea could be one of them.

“In general, the children of politicians are more likely to enter politics themselves the longer their parents serve in office,” he said. “So, given the long political careers of both of her parents, I wouldn’t be surprised to see Chelsea Clinton on a ballot in the future, especially if she does end up assuming a more public role in her mother’s administration.”