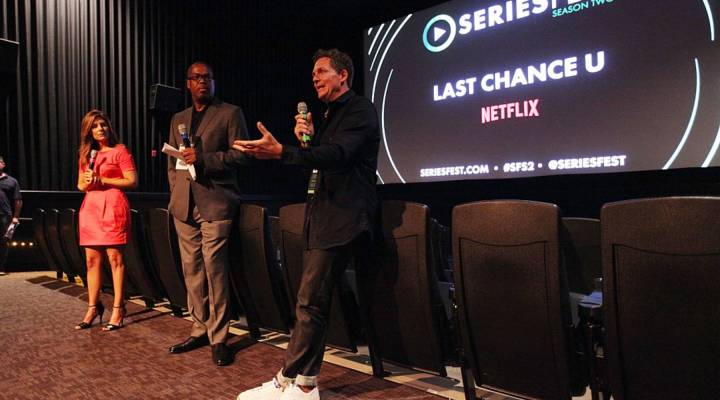 COPY
Filmmaker Gregory Whiteley speak after the screening of Netflix's 'Last Chance U' during SeriesFest: Season Two at Sie FilmCenter on June 24, 2016 in Denver, Colorado.   ason Bahr/Getty Images for SeriesFest

Football season is still a ways off, but if you have a Netflix account, your wait time is about to come to quick close. The streaming service launches its new series “Last Chance U” on Friday, July 29th, which documents a season with the Eastern Mississippi Community College team based in Scooba, Mississippi. The program is a last stop for players who have run out of other options but still want to play football, hopefully professionally. And with nowhere else to turn, the stakes couldn’t be higher.

Greg Whiteley, the filmmaker behind Last Chance U stopped by Marketplace to discuss the series.

Whiteley on the town of Scooba:

On the kinds of players that join the program:

You have at this particular school, at this particular junior college football program, they have 3 kinds of players. One is a kind of player that shows up, no division one program was gonna extend them a  scholarship ‘cuz they just simply weren’t good enough but they just want to keep playing. So they go to a smaller school like this just to keep the dream alive. The other type of player is a player that is there because they had a division one scholarship but it wasn’t working out so rather than sit out a year they go to high-profile junior college program like this to sharpen their skills. The third is somebody where they have otherworldly talent, but many of them will show up to a place like Scooba without traditional academic skills.

I think this is the first series that gives you the kind of access in which you really get to know the kinds of people that are chasing this dream of playing professional football. And all credit goes to the coaches and the administration at East Mississippi, they were very proud of the kind of program that they have painstakingly built over the last 8 years, and they should be. It is remarkable what they do. But they completely opened their doors to us, and gave us unfettered, unprecedented access. As a result, we do get to show how the sausage is made, and it’s not always pretty.