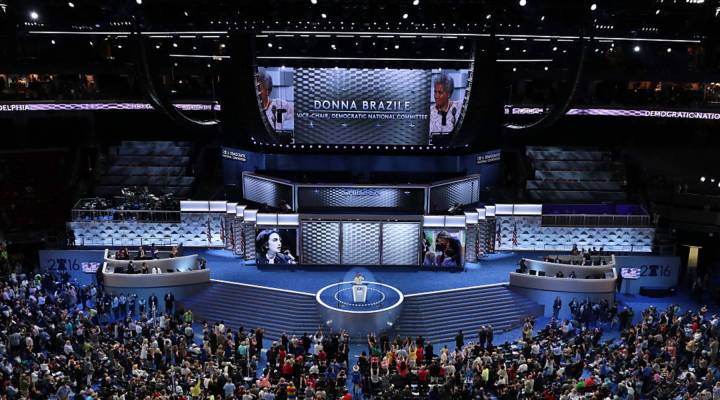 COPY
A general view of the DNC 2016. Chip Somodevilla/Getty Images

It’s easy to think political conventions are all about the speeches and the pageantry and the sign-waving, but they’re also a business opportunity.

A great chance for lobbyists to come and schmooze with decision makers trapped in one convenient location.

Suzanne Ffolkes is Vice President of Communications at Research!America, a nonpartisan group that advocates for medical and scientific research.

Some top priorities include more dollars for research to develop a Zika vaccine, keeping the Cancer Moonshot going and a full repeal of the medical device tax under Obamacare.

Ffolkes flashes confidence and charm as she meets Oregon Congressman Earl Blumenauer, a Proctor and Gamble executive, even a college kid at a brew pub in downtown Philadelphia.

She’s on the lookout for people who share her interest in solving medical problems, and the parties and luncheons here are a great place to do it.

Sheila Krumholz, head of the Center for Responsive Politics, said when the conventions come around, entire Washington lobbying firms have been known to pick up stakes and move operation to the host city.

It’s a smart play when you’re in the business of selling influence.

“It’s much easier to have these conversations when people let their guard down, the champagne is flowing, and the music is playing. There is a feast, a lavish spread out,” she said.

“People are in a good mood, they are willing to have a conversation that they may not have had time to back in Washington.”

Another benefit to hitting the conventions, said Krumholz, is that it’s easy to find plenty of politicians running around looking to put out another mailer or make an ad buy as Election Day nears.

But Dr. Georges Benjamin, head of the American Public Health Association said policy makers, and the presidential campaigns, want more than money at these events.

“They are looking for solutions to problems that we need to be solving in the next administration and Congress,” he said.

While the folks who could help your cause may be at the convention, Benjamin said they’re easier to find when there’s an incumbent President.

This year, at least when it comes to issues of public health and medical research, it’s a bit of a challenge.

“There’s no question I know very clearly who is interested in health on the Clinton campaign,” he said.

“We are really struggling to figure out who is advising Mr. Trump.”

Ffolkes with Research!America has also reached out to both campaigns.

She has asked the candidates to provide statements on how they want to advance medical research, though Hillary Clinton has publicly laid out several ideas already.

But as long as she’s in Philadelphia, Ffolkes will keep working the room.

“You never know when you might meet some influencers who you can work with in the future,” she said.