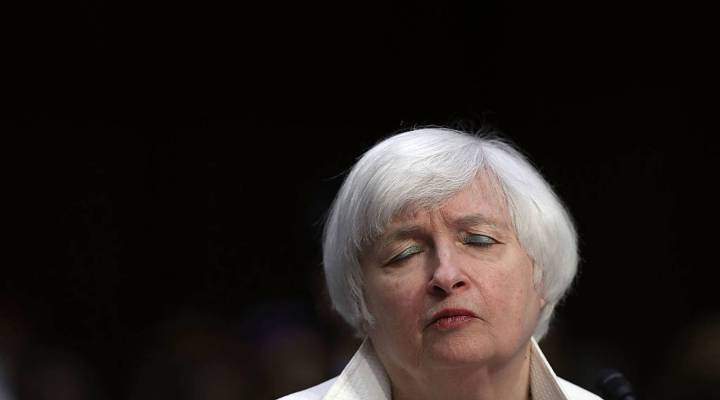 COPY
The Fed didn't raise rates and no one is surprised.  Win McNamee/Getty Images

The Fed didn't raise rates and no one is surprised.  Win McNamee/Getty Images
Listen Now

The Federal Open Market Committee (FOMC) announced at the end of its two-day July meeting that it is leaving interest rates unchanged. The Fed last raised short-term rates by 0.25 percent in December 2015, after dropping rates to historically low levels at the beginning of the Great Recession.

The FOMC’s statement pointed to gradual strengthening of the economy in recent months—including in the labor market and consumer spending. It said that inflation has not increased to the Fed’s two percent target level, and that inflation will be monitored closely in coming months. The Fed’s mandate calls for it to govern monetary policy to achieve two objectives: maximum employment and moderate inflation.

Steve Murphy at Capital Economics in Toronto said that based on the economic data alone, the Fed would likely have raised rates at its July meeting.

“Economic growth is picking up — especially driven by a surge in real consumption,” said Murphy. “The labor market is very close to full employment. So based on the data we’ve seen, we would normally expect the Fed to tighten — especially if, as they say, they’re data-dependent.”

But Murphy said that Janet Yellen and the other Fed policymakers are also watching the political calendar.

“The Fed has historically swayed from doing anything that’s deemed to be in response to what’s going on politically — especially in an election year,” said Murphy.

Bernie Baumohl at the Economic Outlook Group said that the Fed is trying to anticipate what businesses and consumers will do in coming months, and that is proving harder in this election season than previous ones.

“You want to make sure you have appreciation of what the economic climate will be in 12 to 18 months” said Baumohl. “The problem is, we have the wackiest election in modern history.”

From Baumohl’s perspective, the economic climate is clouded primarily by the highly unorthodox economic proposals Republican candidate Donald Trump has made in his speeches— on trade, the national debt, taxes and international relations.

“You’ve got a candidate that actually says they will be able to renegotiate the payment terms on the U.S. national debt, so that foreign and U.S. investors may not get 100 cents on the dollar,” said Baumohl. He believes that if the presidential polls remains close through early fall, uncertainty will increase, causing businesses “to delay any kind of major capital spending program. They might scale back even hiring.”

“Any notion that somehow the U.S. would not pay in full and in a timely fashion on U.S. Treasuries is simply abhorrent–we shouldn’t contemplate that,” said Holtz-Eakin. “Interestingly enough, when he said those things, markets didn’t react at all, so they either don’t think he’ll be elected or don’t think anyone will really do that.”

Holtz-Eakin thinks the primary uncertainty that financial markets and Fed policymakers face right now is not knowing which party and economic ideology—right or left—will be ascendant in the November election. He agreed with Baumohl that this uncertainty may be a drag on the economy in coming months. But he said it’s par for the course in any presidential election year.