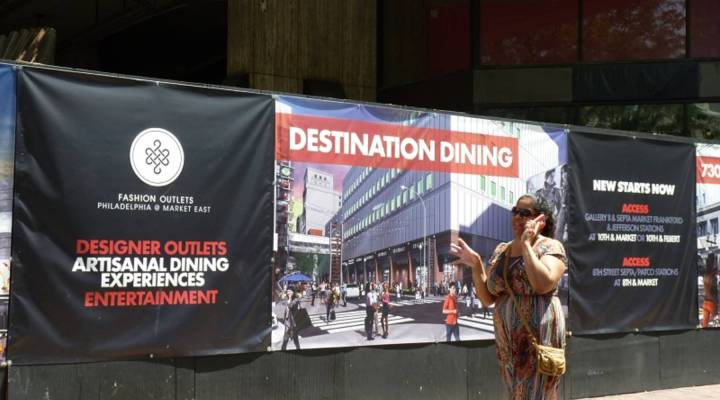 COPY
Pedestrians pass by advertising for the Fashion Outlets of Philadelphia, which will replace the old Gallery at Market East shopping mall.  Todd Bookman

Pedestrians pass by advertising for the Fashion Outlets of Philadelphia, which will replace the old Gallery at Market East shopping mall.  Todd Bookman
Listen Now

The ground floor was a maze of kiosks and shops, including the Complexion Plus Beauty Store owned by a guy named John Rouse. “It is different now.  But back then, it was real good back in those days,” he said.

There was always a steady stream of customers here, in part because both a commuter train and subway have stops connected to the complex. Today, those trains still run, but most of the stores are shuttered.

Last year, the mall’s owners unveiled plans to renovate The Gallery, to bring in new stores, re-do the tired interior, and, in theory, lure more customers. While the construction continues, commuters can still pass through what’s left of the old food court.

While undergoing an extensive renovation, much of the old Gallery, including the food court, remains open to pedestrians.

Jones, now a writer and columnist, says The Gallery was especially important to the city’s black residents. Many of them came here from poorer neighborhoods with limited shopping options. He’s worried the new space, to be called The Fashion Outlets of Philadelphia, won’t fill that need.

There is development taking place throughout Philadelphia right now. Like many Americans cities, it’s attracting younger, wealthier residents who want commerce that matches their tastes.

“You know the old saying goes, the only thing that’s inevitable is change,” said Anne Fadullon, the city’s Director of Planning and Development. “And Philadelphia right now is experiencing a lot of change, all at the same time. We are seeing a lot of our communities change, we are seeing our downtown certainly go through some change.”

Fadullon said the renovated Gallery won’t be totally unrecognizable. But, it is nearly 40 years old, and due for an update. Plus, she said, it may help draw more customers to the street-level shops surrounding the mall.

John Rouse has no interest in reopening his Complexion Plus Beauty Store in the remodeled space. But he is behind the project.

“I just like to see it get back to the old ways. And really, really turn things around, and I think it will be alright then,” he said.

For now, though, much of The Gallery feels like a ghost town as it’s under construction. It’s a place to pass through, not to shop.