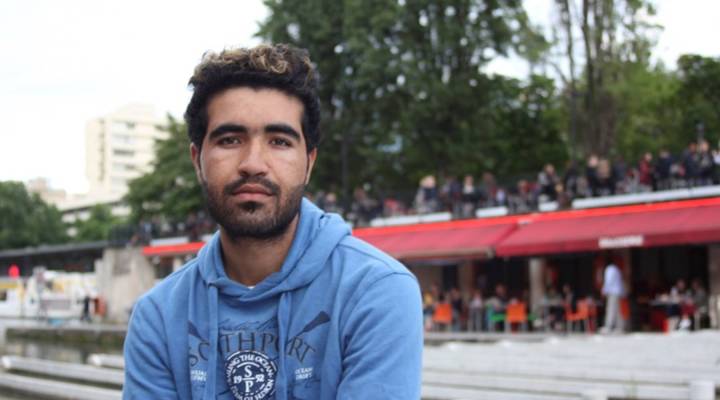 COPY
Sami Achakzai, an Afghan refugee recently arrived in Paris, has been sleeping under a metro bridge. The city has a shortage of housing for refugees and migrants. Emma Jacobs/Marketplace

Sami Achakzai, an Afghan refugee recently arrived in Paris, has been sleeping under a metro bridge. The city has a shortage of housing for refugees and migrants. Emma Jacobs/Marketplace
Listen Now

The city of Paris has started construction on a pair of urban refugee camps, which will provide modular shelters for more than 1,000 people.  The city hopes the project, announced by Mayor Anne Hidalgo in May, will help to eliminate tent cities that have emerged in public spaces throughout Paris.

The city’s plans were news to Afghan refugee Sami Achakzai but he could attest to the need. He had come to Paris three weeks before, after confronting anti-immigrant sentiment in Germany. Since his arrival, he has slept under elevated metro tracks. He’s struggled to access daily essentials, like a place to wash.

“It is now two and a half weeks that I [haven’t] taken bath,” he said. “When I go to the public shower they don’t give me permission to enter. They tell me you don’t have shampoo or you don’t have a towel. I say I don’t have anything. I’m a refugee.”

The new city-constructed refugee camps—or “welcome centers” will provide shelter and showers. One will be for single men like Achakzai, the other for women and children.

The exact locations of the camps, expected to open in September, have not been shared because city officials fear disruptive protests, but one will be located in a dense neighborhood of northeast Paris  known for its large immigrant population, and the other in the south of the city.

The French government has concerns the project could attract more refugees to Paris. But Hidalgo argues the city needs to address the increasingly visible problem of new arrivals living in the streets. News channels have carried images of what have become regular evacuations of tent cities carried out by police in riot gear.

Those present for these evacuations are sent to shelters but many come back, explained Manon Ahanda, pointing out barriers that have appeared under much of the elevated portion of the rail line.

“All the way to the [neighborhood] La Chapelle, you have fences like that to prevent people from setting up there,” said Ahanda, who works with a coalition of volunteers providing food and support to migrants, who are mostly from Afghanistan, Eritrea and Sudan.

She said they return because many of the shelters refugees have been sent to provide only short-term housing.

At the same time, she noted, “there are between 50 and 100 migrants who arrive every day, who will not necessarily stay but there’s a large turnover.”

The city of Paris was inspired by a refugee camp recently constructed outside the town of Grande-Synthe by Doctors without Borders. For about $4 million, the non-profit put up hundreds of wooden huts for mostly Iraqi families who had gathered there, hoping to find a way across the English Channel to the U.K. but increasingly trapped in a long-term limbo.

In Paris, those who wish to stay in France will struggle to find permanent housing in a tough and bureaucratic Paris rental market.

A camp for new arrivals will not solve that but, Ahanda said, “in the mid-term, it’s better than nothing and in Paris there is really nothing for the new arrivals.”

Achakzai agreed. Only in his early 20’s, he has both stylish bleached highlights at the tips of his hair but also a scattering of white hairs around his temples.

For the moment he’s stopped travelling — his refugee application in France has recently been denied, and he faces deportation back to Germany.

The story has been updated to reflect that the city of Paris is building two separate camps for men and women.