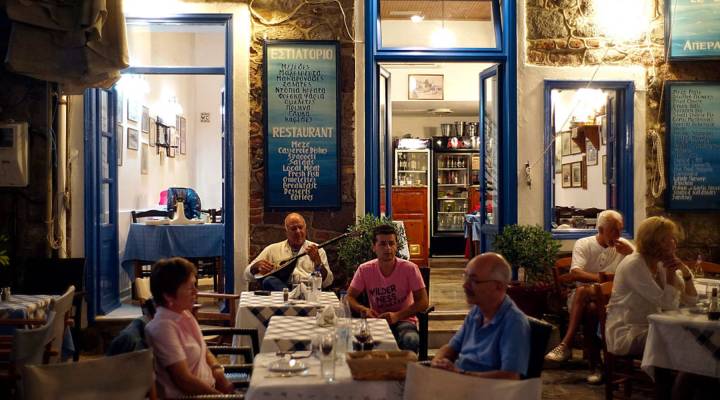 COPY
People sitting outside of a restaurant in Greece.  Milos Bicanski/Getty Images

People sitting outside of a restaurant in Greece.  Milos Bicanski/Getty Images
Listen Now

A year ago, 39-year-old Effie Panoutsakapoulou was stressed out at the bank where she works in Athens. The government had slapped on capital controls and hysterical customers clamored every day to get their money out of their accounts.

This summer, with the third bailout under way, the air of crisis has abated but – for Effie – an undercurrent of anxiety remains.

“We don’t have a lot of work at the bank. We’re not working,” she said.

“We don’t have any customers. Nobody has any money. I don’t know how they keep on paying our wages. Every day I work out how much money I made that day to help the bank and the last three months it’s been five euros per day, ten euros per day, nothing per day. So it’s hard,” she said.

Some things have gotten better. A year ago Effie Panoutsakapoulou was on the brink of divorce. Her husband, an unemployed architect, bitterly resented the fact that she was the family’s sole breadwinner.

“We’re happier now. My husband accepts that he has to stay at home with the kids. He’s becoming a better dad. He seems more relaxed about the fact that he doesn’t have any work and that I’m the breadwinner.”

Christos Mavrou, a 36-year-old sales manager is still the main breadwinner for his extended family that includes his parents, his brother and his sister in law.  Over the past year, his life has not improved financially. Tax hikes – demanded by Greece’s creditors – have pushed up the cost of living.

For Greece’s government to get the third bailout it had to make progress on balancing its books and has pledged to levy higher taxes over the coming year.  Personal taxes   could swallow up as much as 80 percent of some people’s incomes.  Mavrou has an extra financial burden too:  there’s been an addition to the family, a baby niece. Another mouth for him to feed. But he is not complaining about that.

“I bear the weight of my niece’s expenses and I am very happy to do it. She’s adorable,” he said.