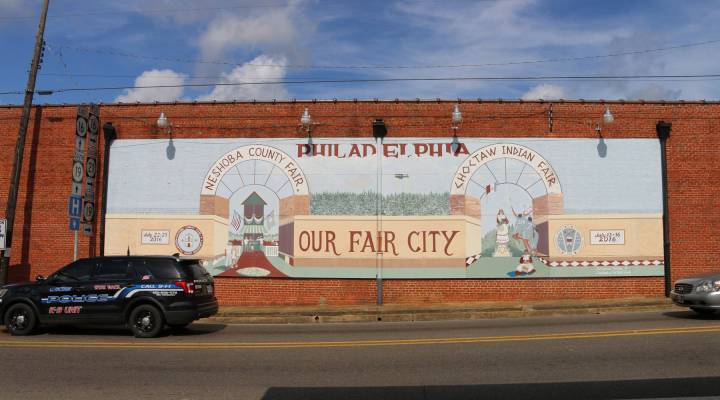 COPY
Philadelphia, Mississippi, is known as the fair city with the area’s biggest attractions: the Neshoba County Fair and the Choctaw Indian Fair. Tommy Andres/Marketplace
How The Deck Is Stacked

Philadelphia, Mississippi, is known as the fair city with the area’s biggest attractions: the Neshoba County Fair and the Choctaw Indian Fair. Tommy Andres/Marketplace
Listen Now

The 2016 Democratic National Convention begins Monday in Philadelphia, Pennsylvania. Delegates of the Democratic Party will officially announce the nominee for president and vice president of the United States in the election.

Last week, we took you to Cleveland, Mississippi, during the Republican National Convention to see what the town and its economy looks like 50 years after Robert F. Kennedy took a tour of the delta.

Turns out, there’s a Philadelphia in Mississippi, too. Philadelphia is a small town made up of approximately 7,000 people in Neshoba County. Both of those names became widely known after three young civil rights workers — a 21-year-old black Mississippian, James Chaney, and two white New Yorkers, Andrew Goodman, 20, and Michael Schwerner, 24 — went missing in 1964. Six weeks and a massive FBI investigation later, their bodies were found buried in a dam near Philadelphia. The killings inspired the 1988 film “Mississippi Burning.”

“I believe in states’ rights; I believe in people doing as much as they can for themselves at the community level and at the private level. And I believe that we’ve distorted the balance of our government today by giving powers that were never intended in the Constitution to that federal establishment. And if I do get the job I’m looking for, I’m going to devote myself to trying to reorder those priorities and to restore to the states and local communities those functions which properly belong there.”

The entrance to the Neshoba County Fair in Philadelphia, Mississippi.

Philadelphia, like the rest of Mississippi and the United States, has made some progress since. Today, Philadelphia has its first African-American mayor, and he’s currently serving his second term. Mayor James Young was born and raised in Neshoba County. He was a young child during the 1964 murders and remembers what life for African-Americans was like back then in the South.

On the importance of being elected mayor of Philadelphia:

Philadelphia and Neshoba County, I been here all my life. I mean, the early ’50s, of course I was a child, the early ’60s, you know, we knew about the racism, we knew about the murders and all those things. But this is my life, I’ve been here. So, the first few weeks in office was like, unbelievable. You had people traveling from Louisiana, Michigan, West Virginia, you know, all over, just wanting to see if this is real. It kind of began to sink in how important it was to them. I mean, it’s important to me but it was just a bigger message to those that was really in the struggle.

On how Philadelphia needed to face the past and own up to racism to get to where it is today:

Our society is in a constant motion. You guys, younger guys, y’all got a different way of looking at things. But the problem is, the issues are still there. Whether it’s 1940 or 2016, how we deal with these core issues dictates whether we succeed or fail. And I think Philadelphia has stepped up to the plate and said, “We acknowledge our past. It’s not pretty. It’s violent.” And I’m in my second term as mayor of this city, and the second term was sweeter than the first one because I think the first one people thought, “It’s just a fluke of nature and of timing.” You know, timing is everything in some cases, but when I won the second term it was like confirmation that we trust you, that we re-elect you because of your work and not because of your color.

On how Philadelphia is better than it used to be:

If you never been there, you don’t understand what better is. And there’s so many people in this country that is blessed to never know what it is to go hungry. Never knew what it was to have to go outside to use the bathroom. Never knew what it was to be afraid of the sheriff and the local PD. Millions of people in this nation have never experienced that, never experienced being treated wrong simply because you’re black. Do we have issues now? Yes. Are they greater now? Yes, because of the split second that you get the news, it happens in Dallas at 6:01 and it’s all over the world at 6:05. So we’re hearing things more now. So is it better? Yes. Opportunities? Yes. Up to me now? Yes. Freedom to get your education? Yes. Freedom to go where you need to go? Yes. So, when we say that [it’s better] and, I’ll use this term, the millennials say, “How can you say it’s better when we have all these issues today?” Well, Mr. Millennial, you hadn’t been there. You weren’t there. So let me enjoy my better.

What does ‘better’ mean?

The downtown area of Philadelphia is occupied with unique shops and a few restaurants, all of them locally owned. Brandi’s Blues Café is a restaurant-bar that many locals go to for dinner and some live music.

Allen and Jane Crosswhite are regular patrons at Brandi’s Blues Café. Jane was born and raised in Philadelphia and is co-owner of William’s Brothers General Store, a family-owned business in town founded in 1907.

Her husband, Allen works for the federal government as a loan specialist. He is not originally from Philadelphia.

The Crosswhites think life in Philadelphia is great. They believe the local economy has improved and may only get better. However, they admit Philadelphia needs more establishments like Brandi’s Blues Café and places to dine.

Philadelphia’s economy is stable and has been for the past few years. The town is one of the most successful in the region, and there is a diverse mix of farming, manufacturing, forestry and service industries.

A few blocks away from downtown on Carver Avenue, what used to be known as the “Main Street” for African-Americans, once bustled with businesses and activity during the civil rights era. More than 50 years later, the street is quiet and empty, except for some homes and a small establishment called McClelland’s Cafe & Grocery that serves a hearty selection of soul food, sweet tea and a variety of desserts. Beverly McClelland-Gill, 59, runs the café. Her parents opened the location about 60 years ago.

McClelland-Gill, who grew up in Philadelphia, has seen the town change over the years.

“It’s better now, but we still have some ways to go,” she said. “We, as a black race, we have to take on responsibility. We are free now and with freedom comes responsibility.”

McClelland-Gill said what the town needs are more jobs, and that if young people want to succeed, they’ll have to get an education first.

Kiana Rush, 18, is a recent graduate from Neshoba Central High School. She plans to leave for the National Guard in August, and then attend culinary school. One day she would like to open her own bakery, but isn’t sure that Philadelphia is the right place for her business.

Rush said, if we compare today to the 1960s, things are better. But that doesn’t mean racism doesn’t still exist. And, she added, white people don’t like to talk about the history of the town, or the issues of racism happening now.

“Even though racism still exists, people will still smile in your face just to act like nothing exists,” she said. “It bothers me that they don’t want to talk about it.”

Rush emphasized that things are better for her than they were for her grandparents, but she fears for future generations.

“Things are changing,” she said. “People say there is not really racism for younger people, but I feel like it’s going to come sooner or later. That we are going to start turning against each other and clash.”

Race, poverty, income inequality and economic opportunity in this country aren’t going be unpacked in a couple of radio stories or in a set of political conventions, even with convenient historical parallels like the ones we’ve drawn. Context matters, though, and the reality behind all the politicking we’ve heard this year and will be hearing for the next couple of months.