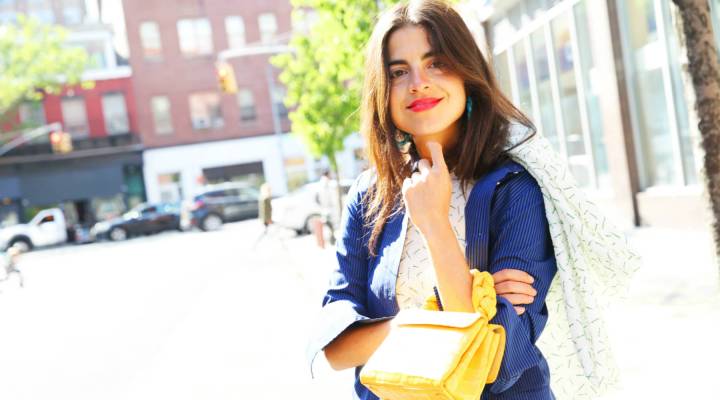 It is rare that a writer becomes a veritable, recognizable celebrity. But at only 27 years old, author and fashion blogger Leandra Medine is the exception to the rule.

While studying journalism in college, Medine started her fashion blog Man Repeller in order to have clips to show when she started applying for writing jobs after graduation. Those clips were never needed; by the time she graduated, she was the writer, editor, stylist and model of a monetized entity.

At the start, the blog covered trends that women tend to love and men tend to hate. As defined on the site itself, a Man Repeller is “she who outfits herself in a sartorially offensive mode that may result in repelling members of the opposite sex. Such garments include but are not limited to harem pants, boyfriend jeans, overalls, shoulder pads, full length jumpsuits, jewelry that resembles violent weaponry and clogs.”

However, in the six years since this definition was penned, the blog has evolved. Today, the blog covers everything from fashion to fiction, and its daily essays and slideshows have maintained a loyal following of women (and men) with wide-ranging interests. The blog has two associated podcasts called Monocycle and Oh Boy!, and multiple partnerships with clothing and beauty brands.

Arguably, it seems Medine’s biggest success has been her ability to carve out a space that previously didn’t exist in fashion — where analyses of this season’s Prada collection fall alongside frank discussions of mental health and female entrepreneurship. She and her followers form a very specific market, one perhaps not explicitly recognized before.

For her perspective on the business of her blog, Leandra Medine sat down to talk with Marketplace Morning Report host David Brancaccio.

On changing the definition of “Man Repeller”:

The reason I crossed out that entry is because when I launched Man Repeller, it was a very literal, niche fashion blog. And so we were writing about trends women loved and men hated. And a lot of those things needed definition, so we tried to make it really, really simple and literal. But as the site has evolved, the definition has changed so much and it’s not just a fashion site anymore. We cover culture and, sometimes, news and our approach is really humorous and, above all else, we really nurture and foster a growing community.

On redefining the fashion blog/magazine:

By the time I graduated college, I was sick of what was out there. I wanted to bring something new to the internet. So, when I started writing Man Repeller and thinking about what it was going to do after it started earning traction, and how it was going to affect women, I thought of myself and I thought of my own children and what kind of world I want to bring daughters into. You’re not stupid because you’re interested in fashion, period. And that’s the way that magazines may have made us feel.

On monetizing her blog:

There was no real monetization strategy… Sophia Amoruso, the founder of Nasty Gal, is a close friend of mine and we sort of came up together. When I was just launching Man Repeller and Nasty Gal was really new for her, too, she reached out to me and said, ‘Hey, I’d like to advertise on Man Repeller.’ And I just said, ‘OK…that will be $2,000 for an ad that will last on the site for one week.’ And she said OK, and that was the way my first transaction occurred! …It took realizing that monetizing my website was not going to affect the quality of the content – and was, in fact, going to support better quality content – to come up with the current strategy, which is very much motivated by integrated stories.

Click the above audio player to listen to the full interview.