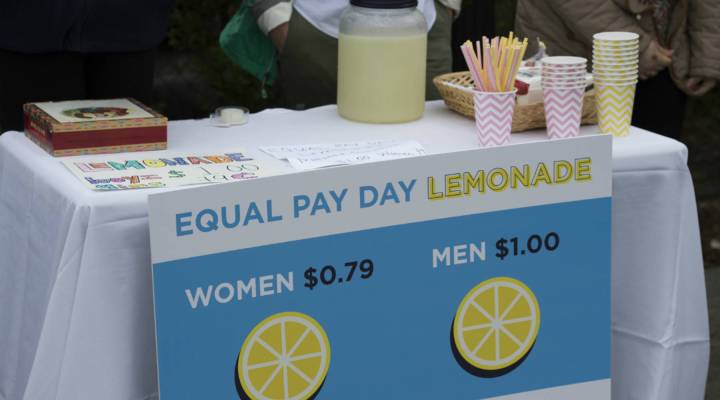 COPY
The often-referenced figure that women earn 79 cents for every dollar men do isn't the whole story. MOLLY RILEY/AFP/Getty Images

Women earn 79 cents for every dollar men do, but people on both sides of the issue would likely say that’s not the whole story.

Critics may point to the jobs women choose. But a new paper from the Economic Policy Institute complicates that idea, tracing all the different forces pushing women toward lower-paying jobs from a young age through their entire careers.

In fact, only about a third of the pay gap can be attributed to chosen profession, the EPI writes. If men and women were paid equally within the jobs they already hold — even if women still held a disproportionate amount of lower-paying jobs — more than two-thirds of the gender gap would be closed. That’s controlling for education and other factors. Women are more highly educated in general, the paper’s authors write, but they “cannot educate themselves out of the gender wage gap.”

Women are set on their educational path from an early age. EPI identifies a “self-fulfilling prophecy” from parents, whose expectations for their children correlate with their self-confidence and school performance. Even women who seek a degree in, say, engineering, could be steered away by the culture and expectations in that field. EPI cites tech’s reputation for sexism, and other jobs where culture rewards 100-hour work weeks and 24/7 availability. Those jobs become less attractive to women, who are typically saddled with more domestic duties.

“By the time a woman earns her first dollar, her occupational choice is a combination of years of education, guidance by mentors, expectations of those who raised her, hiring practices of firms,” said Elise Gould, a co-author of the study.

Given those factors, women are more likely to pick lower-paying jobs that don’t have those values in hopes they ultimately might earn more later, the paper argues. The EPI calls it a “chicken-and-egg phenomenon.” Then, when women begin to take over a field, like home health assistants, average pay goes down. In this way, EPI writes that women may try to make the most logical, lucrative decision for them or their household and still come up short. The paper’s authors give this example: Say a man and woman both hold similar, high-paying jobs, but one of them needs to step away to care for a sick relative or child. It would “make sense” for the higher earner to stay in his job, but the pay gap and underlying gender norms are perpetuated.

Harvard economics professor Claudia Goldin, whose work is cited in the study, has analyzed what types of professions tend to have wider pay gaps.

“There are many sectors, mainly financial sectors, business, law, in which women do relatively less well than men,” she said.

But there are others, including tech and health, where the disparities tend to be less gaping.

She said professions that require a lot of face-to-face time; constant availability; and demanding, inflexible hours tend to develop wider gaps between men’s and women’s hourly pay. And, she argued if men started demanding some of the things a lot of women want, that could go a long way to level the playing field.