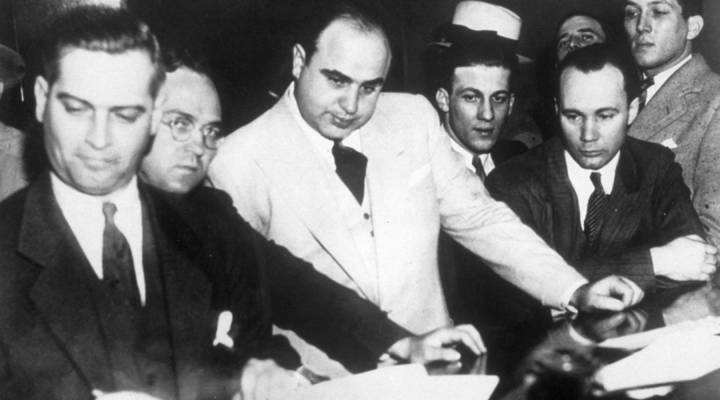 On a recent afternoon in downtown Chicago, Paul Dailing stood before a dozen tourists wearing comfortable shoes and posed a question: “Who wants to spend three hours getting depressed about governance?”

Dailing is the creator of one of the city’s hottest new attractions, the Chicago Corruption Walking Tour.

He told the group he could barely keep up with current events, and warned, “[The tour] is not in any capacity going to be comprehensive.”

Dailing pointed out a storefront across the street. A century ago, this was a tavern called the Workingman’s Exchange, and the political headquarters for Michael “Hinky-Dink” Kenna and “Bathhouse” John Coughlin.

“When you get nicknames like ‘Hinky-Dink’ and ‘Bathhouse,’ you know you’re not on the right side of the law,” he said.

In fact, the colorful 1st Ward aldermen were known to trade beers for votes among other political chicanery. The tour is full of such larger-than-life characters — literally.

Dailing told the story of “Big Bill” Thompson, who was Al Capone’s man in City Hall, and “Big Jim” Colosimo, “the first mob boss who’d control all of Chicago.”

It’s tempting to romanticize this as “the Chicago way,” but Dailing said that ignores the real victims. He resurrected the story of Octavius Granady, who was gunned down by Al Capone’s men on primary election day in 1928.

“Granady did something that Capone could not stand. He ran for political office while being black,” Dailing said. “That’s your Al Capone, that’s your folk hero on your T-shirt.”

Dailing returned to this theme throughout the tour.

“People think of corruption in terms of lining someone’s pockets. But a lot of times, people bend the rules just to keep a neighborhood the color that people want it to be,” he added.

While today’s shenanigans are less obvious, Dailing said they are no less bad for democracy. He called out local politicians who still draw their own electoral maps, and at one point asked the tour group to stop at a downtown intersection.

“So right now from this street corner, we can see four different Illinois representative districts. It’s called gerrymandering and it’s not against the law,” he said. “It IS the law.”

By the end of the tour, several of the group’s members pledged to be more civically engaged going forward.

“The corruption that we know about is only of the people who got caught,” he said.