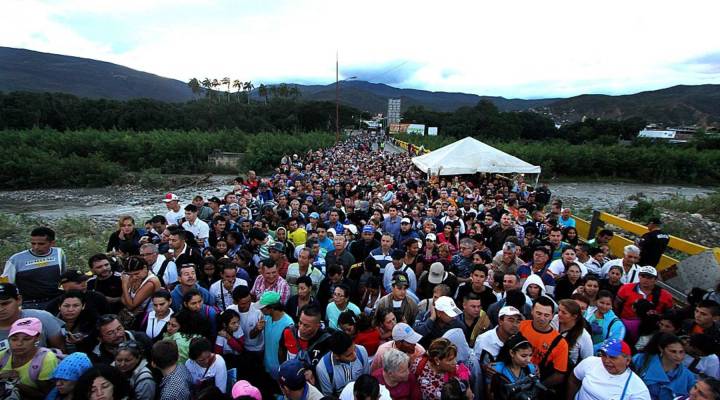 COPY
Venezuelans cross the Simon Bolivar bridge linking San Antonio del Tachira, in Venezuela with Cucuta in Colombia, to buy basic supplies on July 17, 2016. Thousands of Venezuelans again poured into the Colombian city of Cucuta on Sunday, profiting from the brief reopening of a long-closed border to buy food and medicine.  GEORGE CASTELLANO/AFP/Getty Images
The Resource Curse

Venezuelans cross the Simon Bolivar bridge linking San Antonio del Tachira, in Venezuela with Cucuta in Colombia, to buy basic supplies on July 17, 2016. Thousands of Venezuelans again poured into the Colombian city of Cucuta on Sunday, profiting from the brief reopening of a long-closed border to buy food and medicine.  GEORGE CASTELLANO/AFP/Getty Images
Listen Now

There is more desperation in what’s widely considered the most miserable economy in the world: Venezuela. Food is so scarce that this past weekend, more than 100,000 people surged across a newly opened border to buy rice, flour and milk in Colombia.

Other Venezuelans hunt for food in the black market, paying 20 to 100 times state-controlled prices – that is, if basic staples are available. Still others have been seen sweeping up grain spilled on roads to eat that.

In the western city of Maracaibo, desperate people now crowd at supermarket dumpsters.

“And they take whatever they can, like bones or spoiled vegetables,” said Venezuelan journalist and translator Yesman Utrera, now reporting in Maracaibo. “And they just clean it up and take it home so they can eat something.”

Utrera said he himself has gone without sugar for four months.

But when oil prices crashed, Venezuela ran out of petro-dollars to purchase imports.

By Hausmann’s measure, prices have been rising 24 percent every month since January, a rate that comes out to an annual rate of 1,200 percent. The International Monetary Fund estimates this year’s inflation rate at 480 percent, and projects next year’s to be exceed 1,600 percent. Venezuelans lose purchasing power as the effective exchange rate renders the domestic bolivar increasingly worthless in the world market, and the government prints more and more bills.

Still, there’s not enough money to go around – to pay oil industry suppliers, to pay airlines, or to buy food. Yet bond market indicators suggest Venezuela will continue to pay its debt payments to international creditors. In other words, scarce dollars are going to bondholders instead of hungry people in the slums.

“Venezuela needs to send big ships across the ocean, ships that are worth over a hundred million dollars, depending on the price of oil,” said Caracas-based David Smilde, professor at Tulane University and senior fellow at the Washington Office on Latin America. “It’s really completely dependent on international credit markets and international commerce. And it just can’t default.”

At the same time, Smilde said the country also can’t keep going on the way it is.

“We have not hit bottom,” he said. “It can get much, much worse. The conditions continue to deteriorate, and we could see real hunger and starvation. But we’re not there yet.”