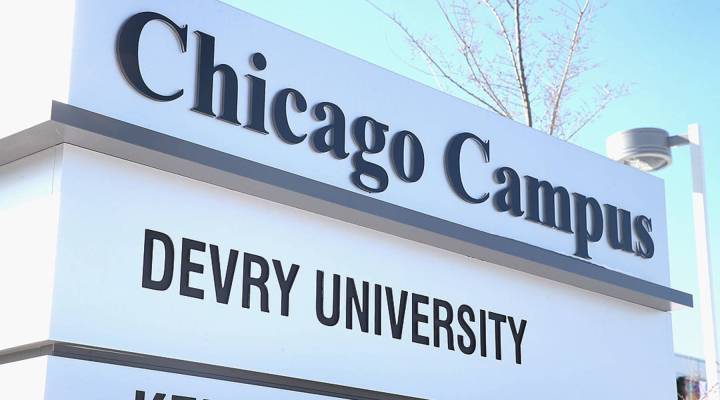 COPY
DeVry University is an example of a for-profit college. New data shows that enrollment in for-profit schools was down 10 percent in 2014. Scott Olson/Getty Images

DeVry University is an example of a for-profit college. New data shows that enrollment in for-profit schools was down 10 percent in 2014. Scott Olson/Getty Images
Listen Now

The enrollment decline for for-profit colleges don’t reflect some major changes in regulation, like a requirement that these colleges show what jobs students got after graduating, to prove that they were worth their cost. A lot of the students who attend these institutions tend to be lower income and older and schools are struggling to sign them up. Kevin Kinser, professor of education policy at Pennsylvania State University, said it boils down to a math problem.

“The for-profit sector enrollment increases in the 2000s were basically based on the idea that you could get a lot of new enrollment and so if a student dropped out or graduated, you’d have two or three new students to replace them,” he said. “They’re just not being able to recruit the number of new students they need to take over from the students that are dropping out and graduating. So, it’s math.”

Ben Miller, senior director for post-secondary education at the Center for American Progress, said he thinks the numbers will continue to drop and he believes there’s a segment of for-profit education that isn’t able to change with the times.

“And that’s mostly on the lower-level training around certificates and some associates degrees,” he said. “That business model I think is on its way out.”

There’s also been a ton of bad publicity. If you were to type for “profit education” into your search engine, you’ll be met with a lot of negative articles, like one calling it a $35 billion cesspool of fraud. Kevin Kinser said that makes a lot of potential students wary.

“And I think many of them are coming to the conclusion that it might not be at least at the prices and the risks in terms of financial aid that these institutions are relying on,” he said.

Prices for these schools are generally lower than last year and even that isn’t helping enrollment.