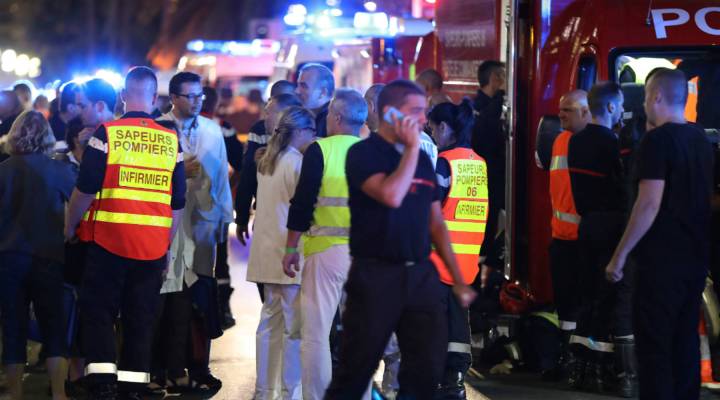 Police officers, firefighters and rescue workers are seen at the site of an attack on the Promenade des Anglais after a truck drove into a crowd watching a fireworks display in the French Riviera town of Nice.  VALERY HACHE/AFP/Getty Images

Police officers, firefighters and rescue workers are seen at the site of an attack on the Promenade des Anglais after a truck drove into a crowd watching a fireworks display in the French Riviera town of Nice.  VALERY HACHE/AFP/Getty Images

At least 84 people have died, including children, after a lorry slammed through a crowd celebrating Bastille Day in the southern French city of Nice.

The driver ploughed on for 2km (1.2 miles) on the Promenade des Anglais at about 23:00 local time, before being shot dead by police.

Witnesses say the speeding lorry swerved and zigzagged in an apparent attempt to hit more people.

Police reportedly found guns and grenades inside the lorry.

President Francois Hollande said the attack was of “an undeniable terrorist nature”.

Prime Minister Manuel Valls has declared three days of national mourning for the victims from Saturday.

A state of emergency, in place since November’s Paris attacks carried out by militant from the Islamic State group, in which 130 people died, has been extended by three months.

The attack in Nice began shortly after the end of a firework display on the seafront for Bastille Day, which is the country’s national holiday.

“I heard lots of screams and everybody was running in different directions. I didn’t know what was going on, it felt surreal and I didn’t move but thought it must be some kind of practical joke.

“Then I saw the truck coming straight at me swerving all over the place. It was perhaps 50 yards away. After that there was no conscious thought, my body took over, time slowed down and I ran and thank God I got out of the way.

“I jumped into a doorway and a very nice Frenchman let me and about 15 other people into his apartment.

“We stayed in there for a while and then when it was safe we left. There were lots of panicked people, dead bodies were in the street and there were police everywhere. I didn’t want to look at the dead bodies.” – Pouya, from Toronto

“It zigzagged – you had no idea where it was going. My wife… a metre away… she was dead. The lorry ripped through everything… poles, trees. We have never seen anything like it. Some people were hanging on the door and tried to stop it.” – Nice resident Wassim Bouhlel

Nader el-Shafei told the BBC he saw the driver face-to-face for about a minute: “He was very nervous… looking for something around him, I kept yelling at him and waving my hands to stop… he picked up his gun and started to shoot police.”

Afterwards he said he ran towards the beach with others, fearing the driver, who has then shot by police, would detonate the lorry.

“This lorry just mounted the kerb, across the street from us and the next thing, all you could hear was banging and shouting and screaming.” – Paddy Mullan, from Northern Ireland, speaking to the BBC.

Once again France is waking up to mass murder on its streets and a profound sense of shock. Police have cordoned off much of the Promenade des Anglais. There is an eerie sense of unease and disbelief that jars with the beautiful beachfront surroundings.

The white truck used to carry out the attack still sits on the road, its windscreen riddled with bullet holes from when police finally managed to kill the driver. This was not a high-tech attack but the brutality and the banality of the method make it all the more terrifying.

A white lorry, the front of which was riddled with bullet holes, continued to be examined by police in Nice on Friday morning.

A journalist with the Nice Matin newspaper reported from the scene that there was “a lot of blood”.

About 50 people have been injured, 18 of them critically.

Christian Estrosi, the mayor of Nice, has told local media that about 10 children were among those killed.

This is not the first time in recent years that someone has deliberately driven a truck into pedestrians on a French street. But the scale, speed and death toll from this apparent attack are unprecedented.

It follows a call by so-called Islamic State (IS) spokesman Abu Muhammad Al-Adnani some months ago for IS followers to do exactly what this truck driver did. This, and other calls for attacks in Europe, are partly in response to the significant losses being experienced by IS to the shrinking territory it controls in Syria and Iraq.

US-led airstrikes, including by French warplanes, are taking a particularly heavy toll there. At home, France has become the number one target of opportunity for IS and its supporters, unperturbed by the national state of emergency that has just been extended.

What we know about the attacker

No group has so far said it was behind the attack; prosecutors said the inquiry would be handled by anti-terror investigators.

AFP reported that the identity papers of a 31-year-old French-Tunisian were found in the truck, citing an unnamed police source.

Local media reports named the man as Mohamed Lahouaiej Bouhlel, but his identity has not yet been confirmed.

Mr Hollande addressed the nation in the early hours of Friday saying France had been “badly hit” but was strong, adding “we need to do everything we can to fight against” such attacks.

“All of France is under the threat of Islamic terrorism,” he said.

The president added that “operational reserves” would be deployed to support the army and security forces across the country, with particular focus on the borders.

Mr Valls said later that the goal of terrorists was to “instil fear and panic”.

“But France is a great country and a great democracy that will not allow itself to be destabilised,” he said.

US President Barack Obama condemned “in the strongest terms” what he said appeared to be “a horrific terrorist attack in Nice”.

British Foreign Secretary Boris Johnson said he was “shocked and saddened by the appalling events in Nice, and the terrible loss of life”.

Nice’s jazz festival has been cancelled and the southern city of Marseille has announced it is cancelling a fireworks show planned to take place on Friday evening.

The hashtag #PrayForNice it trending worldwide and in France#NousSommesUnis (we are united) is also trending.