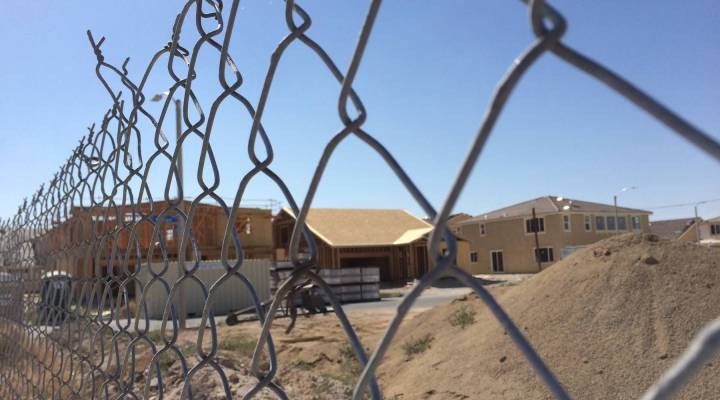 COPY
Home construction has slowed in Lancaster, but building developments under construction will add more solar rooftops to the city's portfolio.   Jed Kim

When Mark Smith judges a rooftop’s solar potential, he looks at a lot more than just square footage.

Smith began Solar Forward in 2005 and said it has become a multimillion-dollar business, having installed hundreds of systems across Southern California.

Mark Smith (left) and Kyle Cerniglia examine a rooftop in Santa Monica that will incorporate solar panels into its construction.

That business may see an increase in its own neighborhood. Santa Monica recently approved an ordinance making rooftop solar systems mandatory for all new construction and major renovations.

It joins a growing number of cities in California that are making solar mandates in pursuit of energy efficiency and reductions in carbon emissions. San Francisco is set to begin a similar mandate in 2017.

As more cities are adopting ordinances requiring solar, each is having to figure out how to tailor its program.

“We are in the trial-and-error phase in many cities,” Smith said. “I think we’re over the hump, but we’re certainly not in smooth sailing yet.”

New kid on the block

On the day Santa Monica’s solar mandate took effect, Dean Kubani, the city’s chief sustainability officer, was examining a solar rooftop at a housing complex. He said the ordinance was approved to aid the city’s efforts to reduce emissions.

“We, like a lot of other cities, are looking at greenhouse gas impacts and carbon impacts, and we’re trying to figure out how can we become carbon neutral,” Kubani said.

Santa Monica currently generates about four and a half megawatts of power from solar energy — enough to power about a thousand homes. How much more the new requirement will add is unclear because of the lack of undeveloped land within the city. Even so, Kubani said the requirement that major renovations also incorporate solar systems would help the technology spread.

“It’s been a built-out city for 30 or 40 years, and people are buying old buildings, knocking them down and building new ones,” Kubani said.

Lancaster was the first city in California to require solar systems be installed in all new construction. Roughly 40 miles north of Los Angeles, the city lies in the western Mojave Desert. The prevalent sun and heat have made solar systems a palatable choice for many residents.

Solar panels are widespread throughout Lancaster, California. Many of the stop signs have panels to power their blinking LED lights.

“Most people have summer energy bills of a couple hundred dollars per month in the summers, and so if you present them a product in which you have a solar energy system that will reduce the electricity bills, I don’t think there’s anyone complaining about that,” said Chuen Ng, a city planner for Lancaster.

Brian Ludicke, planning director for Lancaster, said the rollout of the mandate has been mostly positive.

“What we’ve learned is it’s been a pretty positive experience,” said Brian Ludicke, planning director for the city. “I really have not heard of any significant downsides from the requirement to place solar on new housing.”

Though the city has acted as a pilot program of sorts for solar mandates, many of the lessons learned may only be applicable for Lancaster. The differing climates and regulations between the desert city and Santa Monica, which lies on the Pacific coast, make each location’s solar needs unique.

“Each community’s different,” Ng said. “The housing market’s different, the housing products are different, so I think they’ll find their own unique set of challenges. For us, we had ours, but I think theirs will be unique to them.”

The most transferable lesson may simply be the readiness with which Lancaster residents adapted to solar requirements, said industry officials, especially because the city is largely Republican.

“Lancaster — being a kind of a more conservative, inland city — embracing solar like they did, showed people that this is politically and sort of technologically and economically possible,” said Bernadette Del Chiaro, executive director of the California Solar Energy Industries Association.

Santa Monica seems to have taken that lesson to heart with its new mandate. Solar Forward owner Smith said growing pains will likely accompany the law, as the city developed without solar needs in mind.

“Santa Monica has a lot of challenged roofs at the moment,” Smith said. “Nothing is cookie cutter. They’re all different shapes and sizes, and we have trees that we have to deal with.”

His own house, which he built in 1999, and on which he installed his first solar system, was oriented incorrectly, requiring thousands of dollars in renovation to maximize exposure.

“I had to add a roof plane that was large enough and facing the right direction,” Smith said.