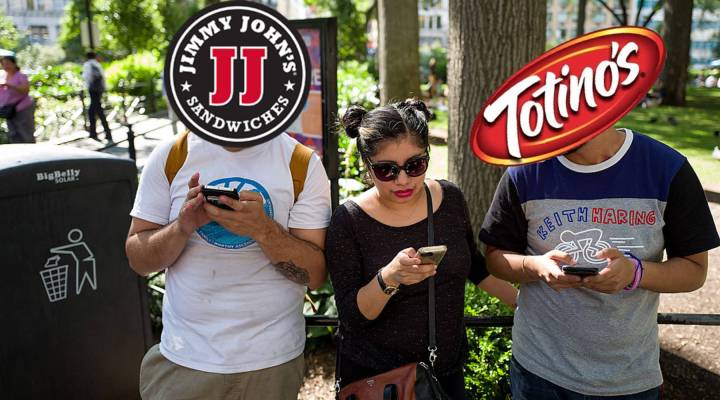 The nation has been gripped by a Pokemania not seen since the ’90s.

“Bonding moments with children these days come only when they look up from their Pokemon cards or other products,” Brian Williams reported in this incredible newscast from 1999. Now those children are grown up and just as obsessed “Pokemon Go,” and Brands are seeing an opportunity to “bond” with consumers.

As small businesses capitalized on the craze IRL, social media managers flooded the internet with “Pokemon Go” stuff. We’ve filled up our Pokedex and rounded up some of the best — or are they the worst? — with the caveat that Marketplace isn’t immune. We’ve done a few stories about the game, and Snapchatted several finds around our office.

Today on Snapchat: We know you’re playing Pokemon Go in the office. It’s cool, we are too. ?➡️ marketplaceapm pic.twitter.com/y18kP1in0N

“Pokemon Go” maps the classic game’s mechanics to the real world, so casual dining chains rushed to take screenshots with their food. Some even inadvertently advertised themselves as a great place to find basic, bland Pokemon.

And here we were just trying to catch lunch. #PokémonGo pic.twitter.com/2Zk3GF55ST

Cheesecake Factory gets points for Photoshop-ing their own version of the game, while Chili’s took things in a more Lynchian direction — confusing and creepy.

Jimmy John’s went the extra mile with a just-tacky-enough Vine.

Props to Target for waiting until it saw Machop, a less common Pokemon, before tweeting. My cubicle-mate said she can confirm there are good Pokemon at Southern California Targets.

When you’re on a #TargetRun and Machop shows up… #PokemonGO pic.twitter.com/b7Y8rIPnHx

A lot of celebrities tried the same stuff, like Mario Lopez, who would like you to know that the most useless Pokemon can be found on his person.

Meanwhile, WWE Chairman Vince McMahon blessed us with this.

I don’t care who you are … Get OUT of my weight room! #PokemonGO pic.twitter.com/JLaB71nSKV

Politicians have mostly stayed quiet about “Pokemon Go” (what are they hiding?) but Texas Supreme Court Justice and prolific tweeter Don Willett got a good one in.

My intern caught this at the Texas Supreme Court.

Many, many sports teams posted photos of Pokemon on the field, but only the Arizona Cardinals took the time to Photoshop decorated wide receiver Larry Fitzgerald catching a Squirtle.

Law enforcement and transportation agencies have been trying to get out a more complicated message than “look we’re cool too!” They’re telling people to stay safe and don’t #CatchAndDrive.

Meanwhile, park rangers are also getting in the game. The National Parks Service has been encouraging Pokemon Trainers to use parks like their own Safari Zone, just as Teddy Roosevelt intended.

Alright, enough Horsea-ing around. Here are the absolute best and worst “Pokemon Go” brand tweets we could find. They’re both pretty lo-fi, and from food brands. Let’s take the worst first.

#EatASNICKERS before you follow a lure too far. #PokemonGO pic.twitter.com/BYY0FodAwK

What’s up with that gif? I’ve never been so unsettled by a candy bar. Weird.

On to the best, from the Totino’s branded account — “Pete Zaroll.” The pun, the weird pizza suit… it’s perfect.

Brands are unstoppable, so we’re sure we missed a few posts, good and bad. Send your best finds our way!