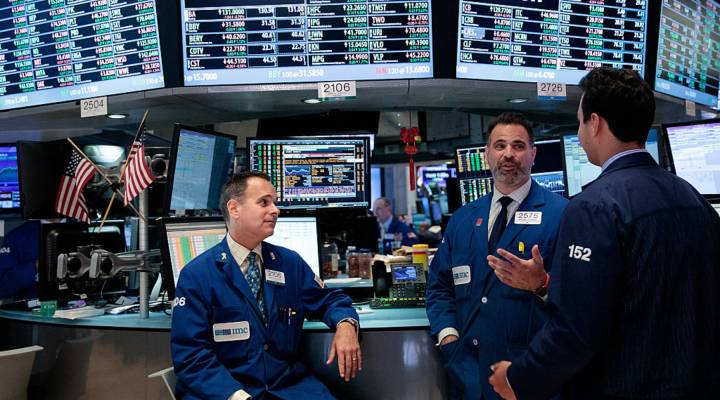 COPY
A group of traders talk while working on the floor of the New York Stock Exchange (NYSE), July 12, 2016 in New York City. The Dow Jones industrial average closed at an all-time high.  Drew Angerer/Getty Images

Two things are happening simultaneously right now in this strange economy of ours. On the one hand, bond yields are at record lows, a sign that demand is driving prices higher.  That’s usually a sign that investors are spooked. But on the other hand, they don’t look very spooked at all — markets are doing great.  The S&P 500 and the Dow hit record highs today.

“Central Banks around the world have caused a collapse in yields,” said Sameer Samana, quantitative strategist with Wells Fargo Investment Institute. Central banks have kept interest rates low, and bond yields as a result.  In parts of Europe and Japan, they’re even negative. “So investors around the world are reaching reaching reaching for yield,” said Lawrence McDonald, creator of the Bear Traps Report. “It forces people into equities and alternatives.”

Many investors are being driven to US stocks. And U.S. bonds remain popular too among international investors because while the yields may be low, they’re still better than most other safe havens around the world. “So that’s keeping demand for international investors high whether its treasuries or even U.S. stocks, really anything priced in U.S. dollars,” said Jay Jacobs., director of research at Global X Funds.

An additional dynamic at play is that many investors last year decided to keep a lot of assets in money markets and bank accounts because they assumed interest rates on those accounts would be driven up by Federal Reserve Bank interest-rate hikes. But they were not.

The result is a somewhat surprising double surge in both the bond market and in equities.