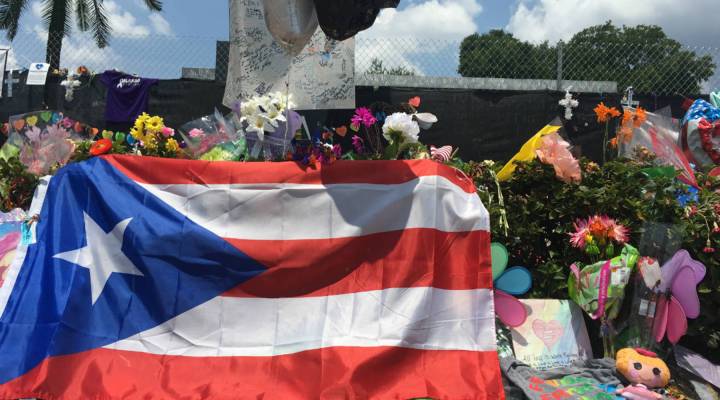 COPY
A Puerto Rican flag adorns the base of the Pulse nightclub sign, where flowers and mementos cover the curb surrounding the fenced-off club. Lewis Wallace/Marketplace

A Puerto Rican flag adorns the base of the Pulse nightclub sign, where flowers and mementos cover the curb surrounding the fenced-off club. Lewis Wallace/Marketplace
Listen Now

The Orlando Pulse massacre in June shocked the country, and it quickly became clear that the shooting had taken place in a gay nightclub. But it was also Latin night at Pulse, and the shooting took place on the eve of the Puerto Rican Day festival. The 49 victims were largely Latino and gay, many of them Puerto Rican.

Latino and Latina LGBTQ people and their families already face challenges others may not, from language barriers to fear of deportation. That divide became more apparent in the effort to get support to victims and their families.

Outside of the Dr. Phillips Center for the Performing Arts in Orlando, a giant makeshift memorial covers the front lawn.

Carlos Guillermo Smith took a seat with his back to the downtown memorial to the Pulse victims.

“It’s kinda hard to look at,” he said. “This happened to my community, to my people. So many of the victims were young, gay Latino men. That’s me.”

His organization, Equality Florida, has helped raise more than $7 million for victims in one of the largest GoFundMe campaigns ever.

“There were a lot of cultural obstacles to getting through this tragedy,” he said.

For example, the organizations raising funds and providing mental health support initially put out information only in English.

Henry Lim, head of the Hispanic Bar Association of central Florida, got called in to help with bilingual legal services.

“There were 321 people there that night, and many of them were undocumented, and they’re afraid to come forward, so we want to make sure that these people understand that they have rights as well,” he said.

He and several dozen other bilingual lawyers have been helping with a slew of issues, including landlord-tenant problems and helping families from abroad get visas to attend memorials. He’s also personally working on six applications for U visas for survivors — those can give legal status to crime victims who cooperate in an investigation, although there’s usually a long wait to get a U visa.

At the Parliament House, a gay club and resort in Orlando, memorials to Pulse and fundraisers for the victims still cover the entryways.

Isa Noyola with the Transgender Law Center said all this reflects things queer Latina, Latino and Latinx (a gender-neutral term) people are already facing, from fear of deportation to job discrimination and violence.

“There is a beautiful community that is thriving and surviving with little to no support,” she said.

She and a group of other Latinx organizers from around the country flew to Orlando for several weeks after the tragedy to try to support local people in making their voices heard. She said lots of LGBTQ organizations don’t have Latinas in leadership or their issues in mind, while lots of Hispanic groups don’t want to address homophobia or transphobia.

Acknowledging the victims’ full identities, she said, at least helps guarantee that the millions of dollars flowing into Orlando get to the right people.

“I think that in this moment, the least that they can do is to acknowledge all of who these individuals were. And a failure to do that is continuing the violence that happened that evening,” she said.