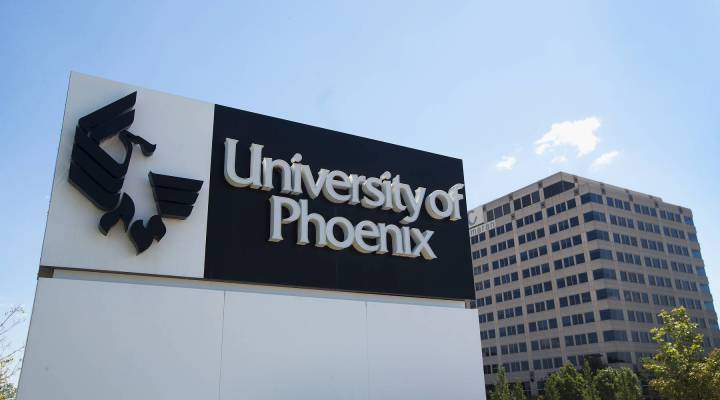 COPY
A sign marks the location of the University of Phoenix Chicago Campus in Schaumburg, Illinois. Scott Olson/Getty Images

A sign marks the location of the University of Phoenix Chicago Campus in Schaumburg, Illinois. Scott Olson/Getty Images
Listen Now

The University of Phoenix, the for-profit college you see all those ads for on TV, is owned by a company called Apollo Education Group. Apollo is due to announce its third-quarter earnings in the coming days, but that quarterly report to shareholders is a tradition the company hopes to avoid in the future. It’s awaiting approval for a $1.1 billion deal to sell itself to a group of private equity investors.

For years the University of Phoenix has seen its enrollment – and its parent company’s stock price – tumble, as the company has faced scrutiny for high prices, low graduation rates and aggressive recruiting.

“Trying to turn around this entity is going to take some time,” he said. “I think being private will allow them to be able to set up a path that can get them back on track.”

It also means the public won’t have as much information about issues like executive pay or lawsuits against the company. Most of the university’s revenue comes from taxpayer-funded federal financial aid for students.

“Others are worried about what will happen kind of behind closed doors at a private firm,” said Robert Shireman, who once led the Obama Administration’s crackdown on for-profit colleges as former deputy undersecretary of education.“The danger really here is that the University of Phoenix goes private, lulls us into believing that they’ve fixed everything, goes public again, and then we have a repeat of the problems that we’ve seen in the past.”

The deal still has to be approved by the Education Department. If it is, another Obama appointee stands to benefit. Former Deputy Education Secretary Tony Miller, who co-founded one of the private equity firms trying to buy company, is expected to become its chairman.