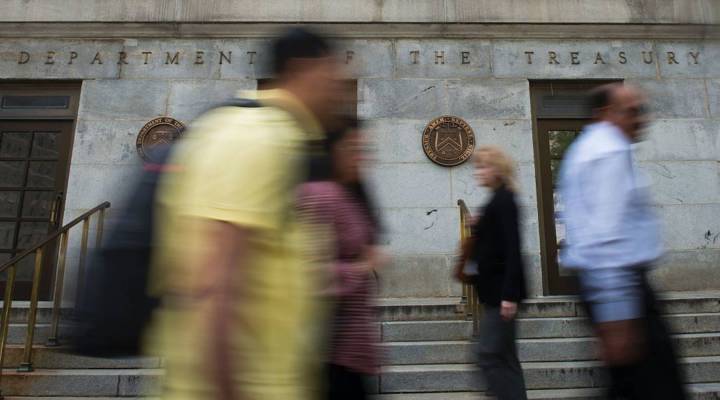 COPY
People walk past the Department of the Treasury on May 20, 2016 in Washington,DC ANDREW CABALLERO/AFP/Getty Images
Brexit

People walk past the Department of the Treasury on May 20, 2016 in Washington,DC ANDREW CABALLERO/AFP/Getty Images
Listen Now

There has been continued global market volatility nearly two weeks after the unexpected victory of the “Leave” side in the U.K.’s EU-membership referundum on June 23.

The British pound has fallen to a 30-year low, and yields on government bonds in the U.S., U.K. and Japan have touched record lows, in what is often referred to as a “flight to safety” by global investors.

Analyst John Canally, chief economic strategist at LPL Financial in Boston, said that after the initial market reaction (sharp and steeply negative) in the first days after the Brexit vote, many equity markets around the world recovered most or all of their value. Now, he said, investors are beginning to see, or at least anticipate, actual economic consequences from the vote–primarily for the British economy, but also for European growth and global trade. That is leading to a search for safe havens.

“Investors for years have been seeking safe haven in the London property market,” Canally said. “So if you lived in Greece, Germany, Russia, the Middle East, Japan or China, you viewed a safe haven as owning a piece of real estate in central London, somewhere like Mayfair or Kensington or Chelsea.”

Canally said the Brexit vote has changed that calculus, as the British pound has fallen precipitously and some U.K. real estate funds have closed their doors. “(Investors) looked around the globe for the next safe thing, and despite the problems we have in this country — politically, and in terms of our budget — people view U.S. treasuries as the ultimate safe haven,” he said.

One effect has been to drive U.S. interest rates down even further, according to Dean Baker, co-founder of the Center for Economic and Policy Research in Washington, D.C.  “If you’re a homeowner it’s a great time to refinance and save some money, because mortgage rates are down,” Baker said. “The bad news: if you’re retired and you want to hold short-term money, and you don’t trust the stock market, then you’re looking at lower returns, lower interest”—for instance, on CDs and passbook savings accounts.

The global flight to safety has led to a torrent of capital flowing into a variety of countries’ bonds, but especially those of the United States. “We actually have positive yields,” Canally said. By contrast, several other leading developed economies have negative interest rates right now.

“In other words, if you give the U.S. government your money, they actually give you something back. Whereas in Switzerland or Japan or Germany, the opposite happens.”