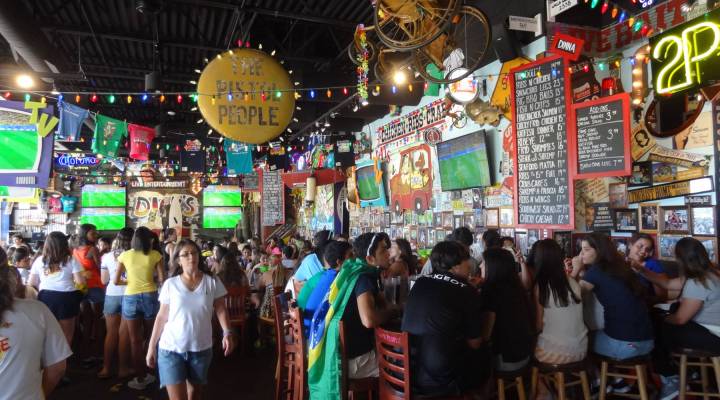 There’s a tradition in Brazil: When a kid turns fifteen years old, they either get a big party or a group trip to Orlando away from their parents.

“Everybody wants to come to Orlando. Disney is the best thing ever. It’s when you are 15, everybody dreams to see Mickey, Minnie,” Victor Costa said, who works for Pegasus Transportation. The travel company is one of more than a dozen in the city that cater to Brazilians. With more than 700,000 of them coming each year, they are Orlando’s most coveted group of Latin American tourists.

15-year-old Olivia Ramos arrived with a group less than a week after the Pulse nightclub shooting. For her, it was a shock.

“Brazil thinks that in Orlando, everything is perfect. It was weird because we never heard about crime in Orlando, and the week that I’m coming, I heard about so much things and I get worried.”

Parents were concerned about their kids. But not enough to change plans. Out of more than 200 kids, there was one cancellation. In their minds, Brazil has its problems, too.

“We should be careful in all places in the whole world,” Ramos said. “I will not let this like ruin my trip.”

Within 24 hours of hopping off the plane, Ramos and the other 15 year olds were hopping onto a coach bus to head to Magic Kingdom.

“We’ve had concern from people, especially the mothers of the children with the gator attack. That hit a little bit more home, I think, than the other shooting to the international side,” Rocco Arcuri said, also from Pegasus Transportation.

The travel company has seen bookings down, but vice president Claudia Menezes says it’s not because of the events of recent weeks.

“It was sad but we saw more (that) the economic problems in Brazil were more an influence. Some groups were affected. There was a drop in the demand. There was not as much shopping as it was before,” she said.

The country is grappling with its weakening currency and the kinks in its political fabric. But the draws are still here according to Menezes. Weather. Theme parks. And shopping.

“A pair of jeans in Brazil can cost about 100 dollars versus you pay like here 15 or 20 dollars.”

And Orlando tourism officials hope inexpensive jeans and the city’s reputation as home to the “happiest place on earth” will keep Brazilians coming back.