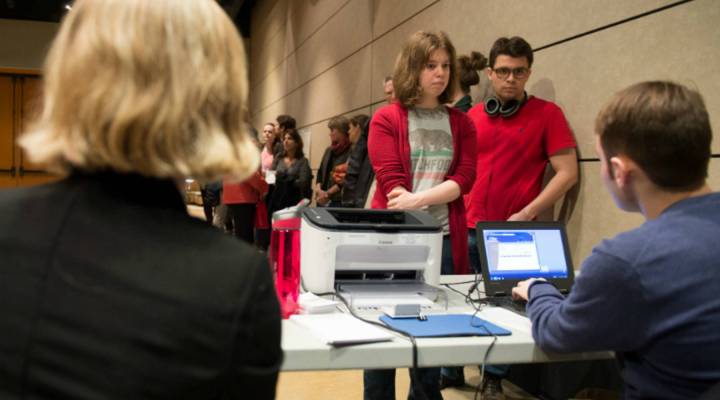 COPY
Students arrive to cast their vote in the Super Tuesday primary on the campus of Hendrix College in Conway, Arkansas back in March.  MICHAEL B. THOMAS/AFP/Getty Images

Students arrive to cast their vote in the Super Tuesday primary on the campus of Hendrix College in Conway, Arkansas back in March.  MICHAEL B. THOMAS/AFP/Getty Images
Listen Now

Students have just left for home after the end of the academic year, but some colleges are already thinking about their return. Next week, a campaign kicks off to encourage universities to sign up for what’s called the All In Campus Democracy Challenge. The idea is to get their students more civically engaged, to get them to vote in November and in many elections after that.

Less than half of students vote. Zaneeta Daver directs the All In Campus Democracy Challenge, and she wants to change that. She says at 16 or 17 people are thrilled to get a driver’s license.

“When they turn 21, they’re really excited about the ability to purchase alcohol,” she said. “And there’s this thing that happens in the middle when they turn 18 that it gives them the right to vote and for some reason they’re not seeing it as important.”

She says universities are well placed to help their students plunge into civic life.

Kim Reid, an analyst with Eduventures, said taking part in this non-partisan drive is one way for schools to counter accusations of liberal bias.

“They can legitimately stand up and say, ‘You know what, we are open to students of all kinds across the political spectrum,'” she said. “And that will help them with their recruiting and in how they appear with the public and in their communities as well.”

Her firm did a survey of this fall’s incoming class. It found two-thirds of students were either excited or fearful about the election. But at least they care.