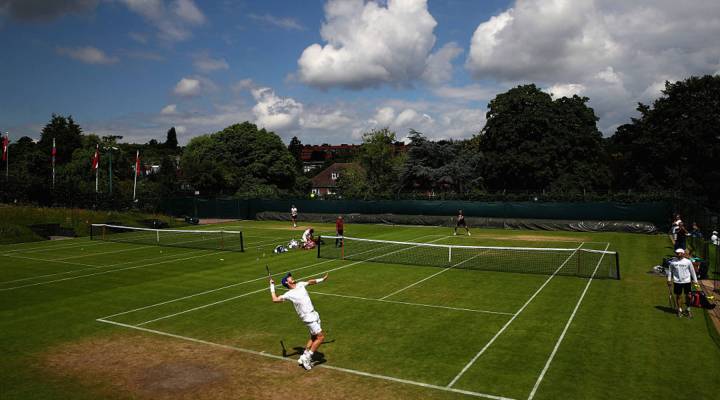 COPY
Andy Murray of Great Britain serves during a practice session prior to the Wimbledon Lawn Tennis Championships at the All England Lawn Tennis and Croquet Club on June 26, 2016 in London, England. Clive Brunskill/Getty Images
Brexit

Andy Murray of Great Britain serves during a practice session prior to the Wimbledon Lawn Tennis Championships at the All England Lawn Tennis and Croquet Club on June 26, 2016 in London, England. Clive Brunskill/Getty Images
Listen Now

Any business that crosses international borders is going to be affected by the currency market. Matthew Futterman, author of the book “Players: The Story of Sports and Money, and the Visionaries Who Fought to Create a Revolution”, said people should think about sports as just another industry.

“Any business that is that big is going to be affected by the macroeconomic earthquakes that happen,” he said.

Brexit has been something of an earthquake. The value of the pound sterling dropped more than 10 percent after the vote and remains near 30-year lows. Stefan Szymanski, professor of sports management at the University of Michigan, said there might be a bright side for some, though. He said organizations like the English Premier League and FIFA might actually benefit from turmoil in the currency markets.

“Think about these institutions really as being exporters,” he said. “They’re exporters of sporting products to the rest of the world. And if you’re an exporter, you actually benefit when your currency is depreciating because that just makes it look cheaper.”

But, it’s a little different for individuals. The Wimbledon Tennis Championships wrap up this weekend. The men’s and women’s champions will make  £2 million – more than any other winners in the tournament’s history. In dollars, though, that’s about $300,000 less than it was two weeks ago.

But even teams and players closer to the United States have to deal with currency shifts. Victor Matheson, professor of economics at College of the Holy Cross, said this comes up all the time in the National Hockey League, where seven of the 30 teams are based in Canada.

“In the NHL, all players, no matter where you play, are paid in American dollars,” he said. “Which means if you’re a Canadian team and the Canadian dollar is weak, you have a hard time signing those free agents.”

And it shows. Not to blame the currency markets, but it’s been 23 years since a Canadian team won the Stanley Cup. That’s just plain loony.