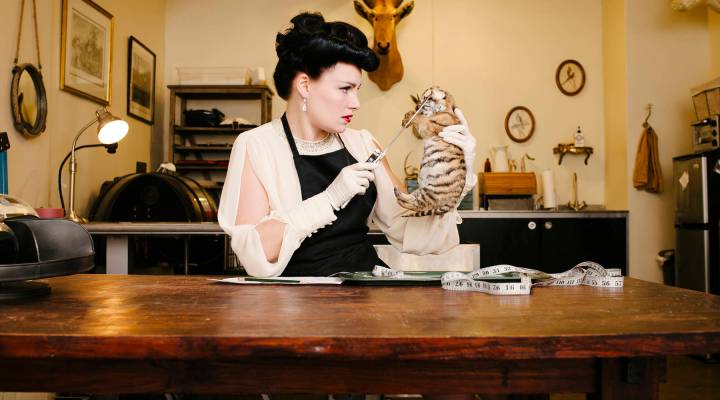 Koti Warner, 33, is trying to put a bird’s head back together again.

“I just put the eyeballs in the skull and then, when you do that, you have to turn it inside out,” said Warner, a microbiologist from Orange County. “I’m pulling the neck skin down over its skull. It’s just very weird. It just feels weird.”

Warner is among 10 women – and one man – taking a recent weekend class at Prey Taxidermy in Los Angeles. She paid $295 to learn how to taxidermy a small bird called a European Starling. In the end, she’ll have a mounted animal to take home with her.

The shop, run entirely by women, is a few floors up in a historic building in the heart of L.A.’s downtown, near a craft beer bar and a popular historic bookstore. Led by Allis Markham, 33, an industry newcomer that made a splash at last year’s World Taxidermy Championships, Prey is symbolic of a shift in the industry – more women are getting interested in taxidermy.

“It’s not the usual place to find a taxidermy studio so my joke is our unofficial motto is ‘the only game in town’,” Markham said.

And being such, she’s been able to see who is drawn to the age-old trade.Since she opened her shop in 2014, she and her assistants have noticed that the majority of their classes are filled with women — around 90 percent.

This shift isn’t just happening in Los Angeles. Industry insiders say more women are competing in national competitions than ever before.

“There is no question we had more females compete in our 2015 show than ever before,” Larry Blomquist said, who runs the World Taxidermy Championships and publishes Breakthrough Magazine, the largest trade publication in the industry. “I would say (it’s been) a dramatic increase.”

The National Taxidermy Association, which puts on its own show as well, says it’s seen its number of female entrants double compared to 10 years ago. And for the first time in the association’s 45-year history, it has a woman at its helm.

President Michelle Burkholder, who has been in the industry for about 25 years, remembers being a lone wolf in her area when she opened her shop in her early twenties.

“I’m excited to see the amount of young girls” competing in shows. But she adds, “There are a lot of women that have blazed the trail for the rest of us,” including Sallie Dahmes, who created her own line of forms for deer heads.

“She’s a gifted artist,” Blomquist said. “I’m sure in many other ways, but it certainly shows up in her taxidermy.” Markham stood out at last year’s World Taxidermy Championships for her work with exotic birds – not only does she represent them accurately, she brings a level of artistic and creative detail that awes even the most experienced of taxidermists.

Besides commissions and classes, she’s done work for the Emmy’s, for Hollywood elites and chic Beverly Hills retailers.

Markham came to taxidermy in a roundabout way. Growing up in Indiana and Florida, being outside with animals was a way of life. Later, she would collect taxidermy – even getting it from her husband for Valentine’s Day.

“I kind of lost my marbles in ‘09 or so and I took all my vacation time and went to taxidermy school…but I really kind of got my beak wet and I loved it,” she said.

She then quit her marketing job at Walt Disney Co. to volunteer at L.A.’s Natural History Museum, getting hired in 2011. In 2014, she opened her own studio.

The women from her weekend class said they were drawn to the class for a myriad of reasons.

Lillie Atkinson, who studies anthropology at the University of California, Davis, thought it would give her a unique perspective in her studies. Bridget Oliver, a waitress who came from San Jose, Calif., has been taking classes to fight her fear of “dead stuff.”

The vibe of the class is more arts workshop than dissection lab.  Markham likes to call it “the weirdest sewing circle you’ve ever been around.”

“The way people are doing it now is not traditionally — hanging a deer head on the wall or whatever,” said Julia Reyburn, a bartender with glowing blue hair. “It’s more for the art of it, you know.”