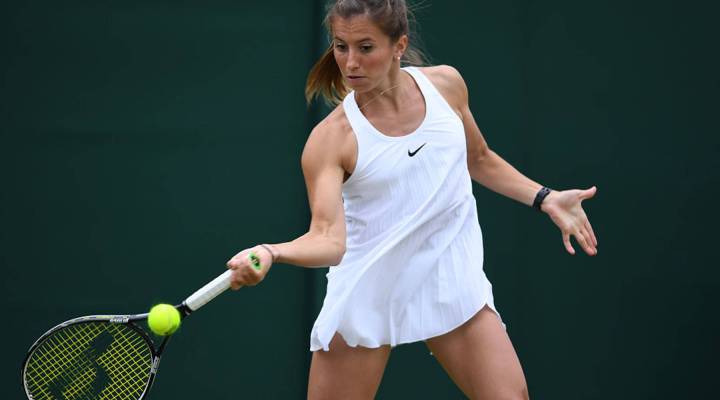 COPY
Annika Beck of Great Britain plays a forehand during the Ladies Singles second round match against Heather Watson of Great Britain on June 29, 2016 in London, England. Beck is wearing the Nike tennis dress in question.  Shaun Botterill/Getty Images

Annika Beck of Great Britain plays a forehand during the Ladies Singles second round match against Heather Watson of Great Britain on June 29, 2016 in London, England. Beck is wearing the Nike tennis dress in question.  Shaun Botterill/Getty Images
Listen Now

Nike in its fourth quarter earnings report yesterday revealed some good news: $8.2 billion in revenues, up 6 percent, and a 17 percent increase in earnings per share. Stock prices are up slightly after a steady drop over the last few months. But aside from all that, the company made a splash on the tennis court, and not necessarily in a good way on that enormous world stage called Wimbledon. It’s all thanks to the company’s new tennis dress, called the Premier Slam.

You could say Wimbledon gets a little uptight about what players wear. Outfits can’t be too revealing, and they have to be white. Not off white. Not cream. White. Nike got the white part right. But the dress? Let’s just say it’s been dubbed “The Nike Nightie.”

“It’s basically a glorified shirt,”said Beth Esponnette, who teaches product design at the University of Oregon. She said a good tennis dress gives total freedom of movement, and doesn’t get in the way of the game. “But I imagine there’s a lot of tugging and pulling or brushing aside,” with the Nike dress, she said.

That’s because the dress is a tiny babydoll with two big slits along each side. Just try returning a 120-mile-an-hour serve in that thing. Karin Burgess, who blogs about tennis apparel at TennisIdentity.com,  said when the dress debuted during qualifying rounds last week  players  “bellies were showing, their backs were showing. And they don’t want to think about that while they’re playing, that so much of their bodies are showing.”

Eugenie Bouchard of Canada reacts during the Ladies Singles first round match against Magdalena Rybarikova of Slovakia on day three of the Wimbledon.

So Nike sent in seamstresses and made adjustments.  Players made them too: one tucked the dress into her shorts. Another used her headband as a belt. Nike said it’s still selling the dress in retail stores, as is, for $100. And Burgess said women will probably buy it.

She said the controversy could “bring a lot of attention to it, a lot of curiosity about it.”

Brands used to make dresses only for professional players. Then they got smart and realized that fans want to wear what their favorite athletes wear, Burgess said. Serena Williams posted an Instagram yesterday saying: “Kinda in love with my Wimbledon dress.”

That could be because she’s not wearing the Nike Nightie.