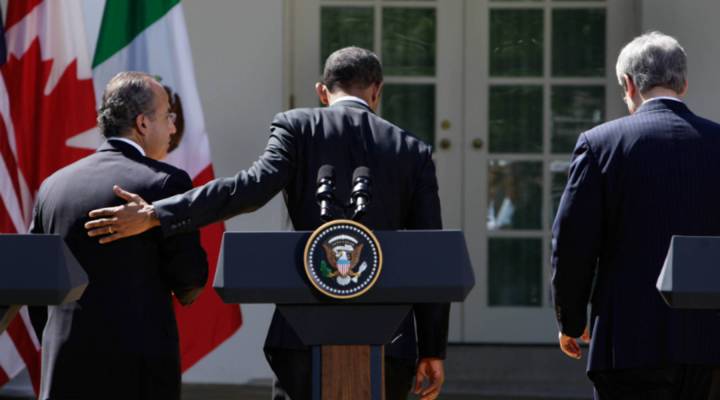 The leaders of the three North American countries are gathering Wednesday for the “Three Amigos Summit,” a meeting during which President Barack Obama and his counterparts will discuss a wide variety of interests the nations share.

The discussions will likely include public assurances that the recent decision by United Kingdom voters to withdraw from the European Union will not have overly damaging impact domestically.

“The event that will dominate the communique and maybe the conversation will be how to pour oil on troubled waters of the Brexit decision and how to convince North Americans that all is well in our continent, even though it may not be so well in Europe,” said Gary Hufbauer, a senior fellow at the Peterson Institute for International Economics.

Others said the leaders would need to present a reaffirmation of the need to cooperate as nations.

“In the wake of Brexit, in the context of a lot of skepticism about trade and international engagement here in the United States, the leaders will come together to try to make the case for regional cooperation, try to explain why we are better together than we are separate,” said Christopher Wilson, deputy director of the Mexico Institute at the Woodrow Wilson International Center for Scholars.

Ahead of the summit, it was announced that the U.S., Mexico and Canada would agree to a commitment to obtain half of their energy from sources free of carbon emissions by 2025.

Other topics to be discussed are likely to include a possible agreement between the U.S. and Canada regarding softwood lumber charges and easing border crossing wait times north and south of the mainland U.S.

“Between U.S. and Mexico, the most pressing trade issue is the obstruction at the border. There have been a lot of measures that are progress, but if you go across several of the U.S.-Mexican border crossings, there are long delays,” Hufbauer said.

Hufbauer said that though the discussions of the Brexit vote are new, many of the items are well-worn traveling ground.

“These all have a long history,” Hufbauer said. “They’ve been very difficult to resolve, and I don’t know whether the Obama Administration has the gumption in these last months in office to put forward serious proposals to resolve some of these issues.”

Whether much is actually accomplished depends largely on President Obama’s actions.

“Either he takes the initiative, or it’ll be a great photo op and wonderful hugs and so forth, some oil on troubled waters as far as Brexit is concerned, but without any serious new cooperation,” Hufbauer said.

Even if new agreements are reached, their longevity could be in doubt, with little time left in the Obama presidency.

“Whatever they agree to in their declarations, whatever commitments they make together may or may not be able to be implemented based on the results of elections here in the United States in November,” Wilson said.

Wilson pointed to the vocal criticism of NAFTA by Donald Trump as one potential way integration among the three nations could be at risk.

“Some of the things that we’re hearing in terms of skepticism on the part of Donald Trump with regards to the benefits of NAFTA and free trade in general would mean that there would be a certain risk, that there would be a loss in North American cooperation should he become the President of the United States,” Wilson said.