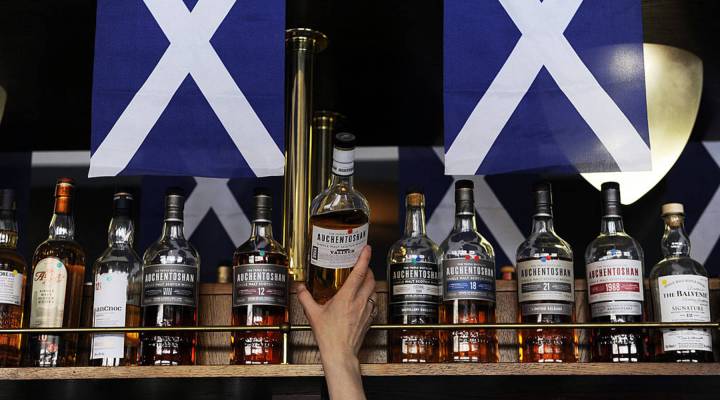 COPY
A barman lifts a bottle of Scotch whisky from a shelf in the Deoch An Dorus pub in the Partick area of Glasgow. Andy Buchanan/AFP/Getty Images
Brexit

A barman lifts a bottle of Scotch whisky from a shelf in the Deoch An Dorus pub in the Partick area of Glasgow. Andy Buchanan/AFP/Getty Images
Listen Now

The United Kingdom’s plans to leave the European Union raise several questions: the nation’s political future, its ability to hold together and the state of globalization – just to name a few.

Another concern? Specialty foods. Dozens of authentic English foods and beverages worth hundreds of millions in revenue are protected by the European Union.

Stilton cheese and Cornish pasties, for example, are among about 70 products protected by the EU based on their region.

With Brexit, British competitors could potentially imitate foods those foods – including Melton Mowbray Pork Pies and Yorkshire Rhubarb – and sell them for less.

If EU laws no longer apply to the UK, O’Callaghan explained, then protected food names could lose their protection within the nation.

It should be noted that Stilton is safe because it has a certification trademark. As for other products (like Scotch whisky), Steve Livens of the British Beer and Pub Association said he’s confident they’ll remain protected.

“Certainly there is a sense for the leave campaign that we need to be able to continue to trade and deal with Europe, but we have no great sense of what that will look like,” Livens said.

The U.K. Protected Food Names Association said it will lobby hard to hold onto its members’ special status. But it could be months – even years – before we know the exact fate of Cornish sardines or Cumberland sausage.