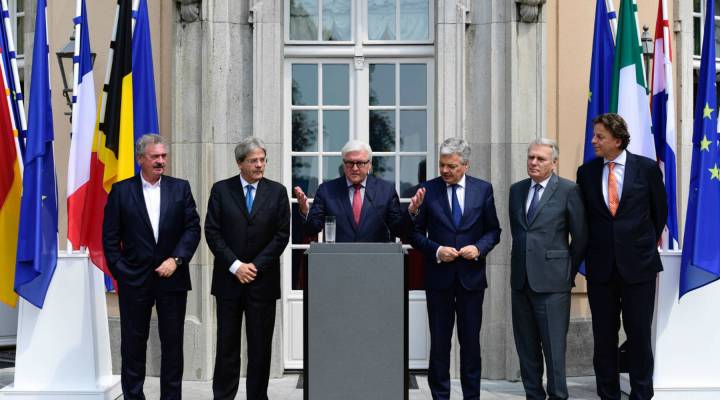 Foreign ministers from the European Union’s six founding member states convened over the weekend to discuss the United Kingdom’s decision to leave the EU, urging the region to make a hasty exit, according to our partners at the BBC.

We say here together, this process should get under way as soon as possible so that we are not left in limbo but rather can concentrate on the future of Europe.

Their stance is at odds with German Chancellor Angela Merkel’s, with Merkel arguing that she “would not fight for a short time frame.”

Merkel noted that the EU should avoid intimidation tactics, stating:

I have the feeling we must not try to frighten other countries in the separation negotiation. We are sad about the way the vote turned out. But that’s no reason to be especially nasty in negotiations.

The U.K. continues its long road to independence from the EU. Within two years, the U.K. and the EU will need to figure out a number of issues, including how the nation’s citizens will do business in its neighboring countries and vice versa.

British citizens voted Thursday to leave the EU, a group of countries aligned to create a single European market. The news had an immediate effect on global markets and the U.K.’s political future. The British pound dropped to its lowest level in three decades and U.K. Prime Minister David Cameron, who led the campaign to stay in the EU, announced he will resign in October.

The news also created uncertainty for the U.S., especially for the banking industry. America’s largest global banks have offices in London, where they do business with all of Europe. The exit is expected to affect a quarter of the American bank jobs in the U.K., Marketplace’s Mark Garrison reported.

London residents were “stunned” after the results were tallied, according to Marketplace’s Stephen Beard. Earlier poll results had indicated a win for those who wanted the U.K. to remain in the EU.

“There are many people here today who are shocked, even some who voted for Brexit are in shock,” Beard said Friday. The votes illustrated a clear divide between different age group and classes.