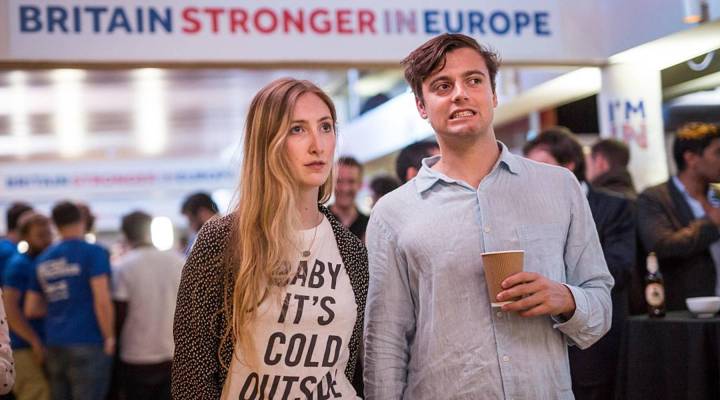 Supporters of the Stronger In Campaign react as results of the EU referendum are announced at the Royal Festival Hall in London, United Kingdom. Rob Stothard/Getty Images
Brexit

Supporters of the Stronger In Campaign react as results of the EU referendum are announced at the Royal Festival Hall in London, United Kingdom. Rob Stothard/Getty Images

British citizens voted to leave the European Union, a political-economic zone that effectively created a single European market. U.K. Prime Minister David Cameron, who led the “Remain” effort to stay in the EU, said he will resign come October. Global markets are extremely volatile and “headed for one of the biggest slumps on record,” according to Reuters. World stocks lost more than $2 trillion in value today, at least on paper. So how will this affect you?

You might not want to look at your portfolio today… It won’t be pretty. European companies have lost billions in value as the markets went haywire after the vote results were announced. The British pound dropped to its lowest level in three decades, although it rebounded a little bit in later trading. Commodities are slumping, with oil down because of fears of Euro-skepticism spreading to other European countries and further slowing global growth.

Although the U.K. probably has a couple of years of negotiation before it formally leaves the EU, American and European businesses are already thinking about the long-term effects. As Marketplace’s Sabri Ben-Achour reported before the vote, “If the U.K. leaves Europe, it also leaves all the trade deals between European countries. U.S. companies manufacturing in the U.K. leave those deals too. Trade barriers might sprout right back up.”

Expect to hear about Brexit and its effect on the global economy on the campaign trail and in ads. Already this morning, both of the major presidential candidates have released statements on the issue.

Clinton: “This time of uncertainty only underscores the need for calm, steady, experienced leadership in the White House to protect Americans’ pocketbooks and livelihoods, to support our friends and allies, to stand up to our adversaries, and to defend our interests. “

Trump: “A Trump administration pledges to strengthen our ties with a free and independent Britain, deepening our bonds in commerce, culture, and mutual defense. The whole world is more stable when our two countries — and our two peoples — are united together, as they will be under a Trump administration.

Markets don’t like it, the global economy doesn’t like it, it has world leaders freaking out, but here it is, uncertainty. The United Kingdom public have voted that they want to leave the European Union, but how exactly that happens and what it’s replaced by isn’t at this point clear,” said Dawda Jawara of international law firm Clyde & Co. That makes it hard for governments and businesses to plan ahead.

Michael Hewson of CMC Markets is fairly certain of one thing, though: “We can expect for U.S. markets to open lower, and I think what it would also mean is that it’s highly unlikely the Federal Reserve will even contemplate raising interest rates this year.”

If you haven’t yet planned a vacation, and you’ve got the money, Europe may now be a more attractive option. The fall in the pound dragged down the Euro as well compared to the dollar, meaning Americans traveling in the U.K. will see their dollars going a bit further. But not everything is necessarily cheaper. According to the Associated Press, some taxes for travelers will drop a bit as well. “For instance, all coach passengers leaving the U.K. for the U.S. pay 73 pounds for the Air Passenger Duty. That tax is now cheaper.”

What’s good for vacationers is pretty bad for U.S. manufacturers. With the dollar increasing in value against the British pound and the euro, American goods and services become more expensive. Former Deputy Labor Secretary Seth Harris said Europe is the most important trading partner for the U.S., so “anything that is bad for the European economy — including the English economy — is bad for the United States.”

“With Europe struggling economically because of the Brexit,” he said, “our exports are going to soften, and it’s going to be harder for export-sensitive industries to create jobs and to put Americans into good, middle-skill, middle-wage occupations.”