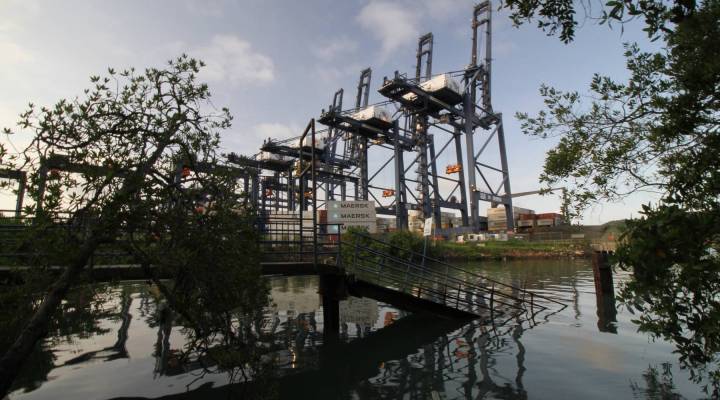 The Port of Balboa, viewed from the Diablo neighborhood, located in the former Panama Canal Zone. Bill Lancz/Marketplace
Listen Now

Panama opens its new, wider canal on Sunday. This week, we’ve been exploring not just this new and improved lifeline for global commerce, but also its timing, right as world trade is in the doldrums, to use a nautical term.

The way Jorge Quijano, CEO of the Panama Canal Authority told it, there are plenty of trade opportunities his canal is now ready to seize.

“Some of it will come from trying to recover back from what went to the Suez Canal, but also we expect we will see better growth in the United States,” Quijano said. “So consumption will go up and we will also see some increases in future years of consumption in Latin America.”

Plus, with all this domestic oil and gas production in North America — fracking — there should also be more liquefied natural gas tankers from the U.S. Gulf headed through the canal bound for Asia, with each ship paying hundreds of thousands of dollars in tolls to Panama each time it goes through.

Train lines border the Avenida Omar Torrijos Herrera and the Marcos A. Gelabert airport, just east of the Panama Canal.

Yet, it is also true that all of global trade on planet earth isn’t the booming business it once was, according to the Bureau for Economic for Policy Analysis in the Netherlands, which dutifully tracks these things. Trade was supposed to come back after the great financial collapse of 2008 and 2009 and it really hasn’t.

“For the last five years, global trade has been stagnant,” said Susan Lund, a trade expert with the McKinsey Global Institute. “Trade in goods is no longer growing any faster than global GDP, and in fact it’s declining a bit. We’ve never seen this.”

Some experts say global trade is cyclical. China is restructuring, Europe is healing. These experts say, just wait, trade growth will come back. But, what if what some call “peak trade” is here to stay?

“Underlying this is something that’s structural and we don’t think will change, and that’s simply that global manufacturing is shifting,” Lund said.

It is changing in part because of disasters like the 2011 Thai floods that disrupted the auto parts and electronics industries around the world. The Fukushima nuclear disaster and the explosion at a cargo storage facility in the Chinese port of Tianjin were other warning signs. In response, some companies looked for ways to make things in fewer places or closer to home.

A spreader hangs from a crane on the Port of Balboa. Spreaders are devices used to hoist shipping containers to and from ships.

“It may be that we’re entering an era when trade becomes a bit less of a thing,” said Paul Krugman, winner of a Nobel Prize in economics for his work analyzing world trade.

Krugman, who now teaches economics at the Graduate Center at City University of New York and writes a regular column for the New York Times, said if trade is less of a thing, it doesn’t spell the end of economic growth. It’s not something to cheer about either. For those worried about the impact of trade on American workers, slower trade doesn’t necessarily promise more jobs at home.

A density map of world trade.

“Even without this slowdown in global trade, the story of trade displacing jobs was probably mostly a story about the past, not about the future,” Krugman said. “A large part of the obviously vulnerable jobs have already gone, in fact we have only a tiny clothing industry in the United States.”

“Trade is almost free already,” Krugman said. “The Trans-Pacific Partnership is about property and dispute settlement and not really very much about trade.”

While there may not be a lot of new geographical frontiers to open up, there is one huge potential growth area for world trade: digital trade. We’ll explore those bits and bytes tomorrow. Find all of our upcoming coverage here.