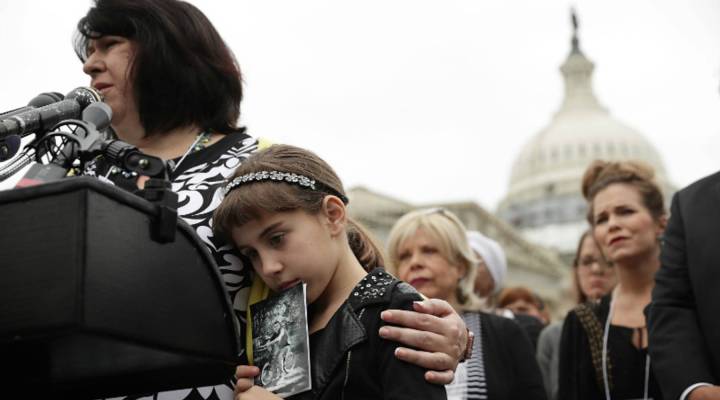 COPY
Alice D'Arpino (2nd L) of Mansfield, Massachusetts, holds a picture of her brother Emmett Scannell, who was killed by heroin overdose, as her mother Aimee D'Arpino (L) speaks during a news conference on the opioid epidemic May 19, 2016 on Capitol Hill in Washington, D.C.  Alex Wong/Getty Images

Alice D'Arpino (2nd L) of Mansfield, Massachusetts, holds a picture of her brother Emmett Scannell, who was killed by heroin overdose, as her mother Aimee D'Arpino (L) speaks during a news conference on the opioid epidemic May 19, 2016 on Capitol Hill in Washington, D.C.  Alex Wong/Getty Images
Listen Now

The Centers for Disease Control and Prevention say 28,000  people died from opioid overdoses in 2014. That’s even though  states have passed more than 80 different laws aimed at curbing opioid abuse over the last seven years.

A new report out this week from the New England Journal of Medicine finds most of these laws have little effect on this national epidemic.

Those measures include making it hard for patients to get prescriptions  from multiple doctors and developing drug monitoring databases.

Dartmouth economist – and lead author – Ellen Meara said the research is clear: All these laws have not helped slow overdoses.

“It’s really time to be honest with ourselves, and ask what has worked, what hasn’t,” she said. “If we don’t, we aren’t spending our time or our dollars on solutions that can actually slow down this epidemic and reverse it.”

Meara and her team looked at how laws impacted disabled people on Medicare – arguably the population these laws aim to help.

“There is a very strong consensus around the country that we don’t have the evidence base to know what works and doesn’t work,” he said.

Next month, Isasi said the NGA will release a collection of the most promising policies that governors and legislators should consider.