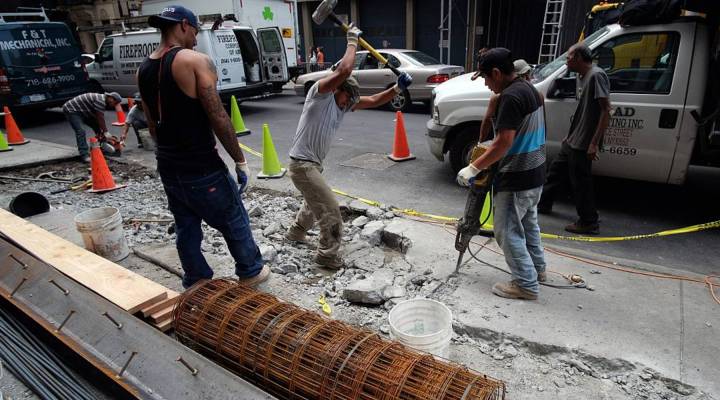 Working-age men continue to trickle out of the workforce and not come back, an issue reinforce in a White House report out this week that also proposes policy solutions.

The people labor economists refer to as prime working-age men, age 25-54, aren’t participating in the labor force the way they used to. Somewhere between 11 and 12 percent of them are not looking for jobs, and not even counted in unemployment rates.

Have we reached peak men? Well, that actually happened last century — in the mid-1950s, when 98 percent of prime working-age men were working or seeking work. Today that number is 88 percent.

“The declines have been much bigger among black men, and among less-educated men,” said Harry Holzer, an economist and professor of public policy at Georgetown University.

Holzer says flat or declining wages are a big factor, as is the skills gap: folks aren’t getting linked up with the right kind of education to get well-paid jobs.

Carlton Koonce directs a youth job program at Partners for Youth Opportunity in Durham, North Carolina, one of the states with the lowest overall labor force participation. He says it’s easy for people in areas of concentrated poverty to get disconnected.

“If you don’t know these resources are out there, you’re thinking, well hey, there’s nothing out there for me but McDonald’s,” he said. It’s easy to lose hope.

“There are very significant barriers to reemployment when you are formerly incarcerated,” said Bryan Stevenson, who directs the non-profit Equal Justice Initiative in Alabama. He says there are at least 70 million people in the U.S. with criminal records, and across racial lines they can expect to have a harder time finding employment and may be more likely to give up.

The White House report suggests a bunch of changes to address all this, including criminal justice reform, unemployment insurance reform, beefed up training and investment in infrastructure.

By the way, no surprise: more women are working today than they were in the 1950s. But most economists seem to agree that’s not a driving force behind men dropping out.