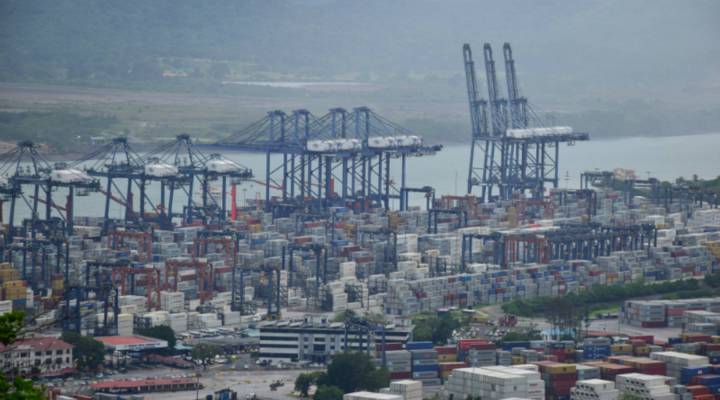 On Sunday, the new Panama Canal opens for business. Great canal, but awkward timing. Don’t tell a soul, but by many measures, world trade has quietly tapered off while nobody was looking. Some talk of “peak trade.” This week, we’re looking at what this means for the canal and the world if globalization ain’t what it used to be. Today, it’s through the eyes of a Caterpillar.

Three-quarters of the steam shovels used to dig the original Panama Canal were designed and built by the Bucyrus Foundry and Manufacturing Corporation, first of Bucyrus, Ohio, later of Wisconsin. The company got serious money for these contracts — and serious branding. In a widely published photograph from 1906, none other than President Teddy Roosevelt was pictured down at the Panama Canal construction site in a white suit and Panama hat, sitting in a piece of Bucyrus heavy equipment.

Caterpillar, the American construction and mining equipment giant, bought Bucyrus five years ago, so now it makes the case that, technically, Caterpillar equipment dug both the original and the brand new, wider lanes of the Panama Canal.

“To put it into perspective, with the expansion work that started in 2007, Caterpillar machines moved — and we know these numbers — over 100 million cubic meters of material,” said Jessica Poliner, head of operations in Panama for Caterpillar.

Caterpillar is doubling down on Panama, committing $25 million in investment there, including a new Caterpillar campus with a spare parts facility and a hands-on “ThinkBIG” technician training center.

“We’re forecasting, and the key word there is forecasting, 15,000 visitor days annually. We host visitors from our customer base, from global distributors — the kind of people that Panama wants to see brought to Panama,” Poliner said. “We’re probably not at our peak right now with what’s going on in the global environment.”

The environment beyond Panama is the real challenge for Caterpillar: China’s shifting economy, low oil prices leading to a downturn in oil field work, and weak demand for commodities mined in places like South America have added up to tough times for the company.

“The company is doing a very good job of dealing with those challenging end markets,” said Kwame Webb, who follows Caterpillar at the research firm Morningstar. “To give you a sense of how tough the trends are right now, the company is probably seeing revenue declines, demand declines that they probably haven’t seen since the Great Recession back in 2009.”

Bucyrus steam shovels worked between 1904-1914 to dig the Panama Canal.

Caterpillar CEO Douglas Oberhelman said this spring that he thinks the company is close to the bottom, meaning it should soon cycle up.

“I think it’s better to describe it as a new normal,” Webb said.

And if this analyst is right? What if it’s not just a Caterpillar problem, but that growth in global trade and investment has run its course? Here’s what we know: Global trade fell off a cliff during the great financial crisis. As the U.S. improved, China continued growing and Europe tried to sort itself out, global trade was supposed to come roaring back. But growth is way down. For a stretch last year, worldwide trade actually declined.

Bob Koopman, chief economist for the World Trade Organization, said one reason is that many of the big regions that could jump into the world trading system are already in.

“The big burst of globalization occurred during the opening of these large economies,” Koopman said. “When you look around out there, you just don’t see that many big economies with that many workers that are likely to suddenly open up.”

Perhaps the big brass band of globalization over the last quarter century has transitioned into something that will still grow, but more modestly.

“We expect that [it will] start inching its way back up,” Koopman said.

Looking south at the first chamber of the Panama Canal’s new, wider set of locks. Caterpillar machines excavated over 100 million cubic meters of material to make way for the new chamber.

So maybe we can say the era of hyperglobalization has come to an end, and we’re approaching something that was more on the previous trend. Koopman believes that’s a fair assessment. Other economists focus on data showing world trade is no longer rising as fast as global economic growth, and use the term “peak trade.”

Shipping companies that use the Panama Canal are hoping and praying the dip is just part of a cycle, but is it? We’ll look at that as the week goes on. Find all of our upcoming coverage here.