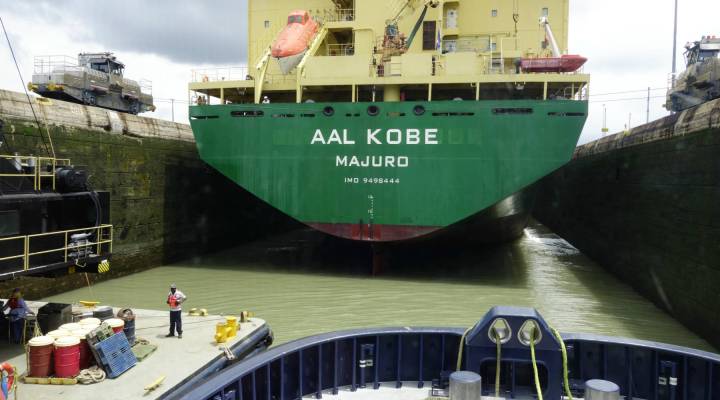 On Sunday, the new Panama Canal — one of the most important arteries for commerce in the world — opens for business. This new, wider channel will allow bigger ships loaded with more stuff to squeeze through, which means the Panamanians can charge bigger tolls. But what about the rest of the world?

The thing that no one is talking about is: By many measures, this canal is opening as world trade growth is petering out.

“The most significant part is not the amount of the vessels, but the size of the vessels,” said Ilya de Marotta, executive vice president for engineering at the Panama Canal Authority.

It’s a game of inches for the ships that squeeze through both the old and new canal. The new locks are more than 50 feet wider than the old. The new lane saves water, created 40,000 construction jobs, and is really a shrine to globalization.

Tugboat captain Mario Hansel and his labor union are nervous about training for the new canal; the simulators they use are kinda dinky. In the old canal, locomotives on rails pull freighters and tankers through like a slingshot, with the help of tugs.

With the new lane, the massive cargo ships will thread the needle under their own power — again with tugs — just in case. The Canal Authority said it has a training plan and it’s not going to rush the biggest possible ships through right away.

“For us it’s going to be a game changer. We do believe it’s going to change some of the world routes for commerce,” said Ivan Zarak, Panama’s vice minister of economy.

For his country, the canal is a cash cow. Some ships already pay more than $300,000 per trip to pass through. This generates about $1.5 billion a year for Panama, even after interest on the debt needed to build it is paid.

Roberto Eisenmann, journalist and founder of the Panamanian daily La Prensa, said a Spanish investor he knows — who was searching the world for new places for his money — put Panama on his short list.

“And I said why? And he says the Panama Canal,” Eisenmann said. “Panama is now building what is actually the most important public works project, certainly in the Americas, and also in the world. The relationship with the U.S., the U.S. dollar, and all the advantages that we have just shows me that this was a place where I want to put some of my money.”

Here’s Panama’s play: Get some of these extra-big cargo ships back from their rival, the Suez Canal, now that they can fit. And maybe a lot more of those containers that travel from China and the rest of Asia to the U.S. East Coast will use the canal instead of routing through Los Angeles, Seattle or Western Canada (as long as the competing American railroads don’t lower their prices to keep business from the canal). Also, the price of oil needs to be a just little higher than it is now to persuade shippers to save fuel on the Panama shortcut.

Plus, something magical from Panama’s perspective has happened since the canal expansion was planned: U.S. fracking. Asia loves American liquefied natural gas, but the ships that carry it from the U.S. Gulf were too big for the old canal.

“The U.S. has become such a large producer of liquefied natural gas — and it’ll fit the new locks,” Zarak said.

A ship carries wind turbine blades just outside the entrance of the Panama Canal.

So if natural gas is one opportunity, what’s the challenge? Well, trade in general, which never recovered from the great financial crisis. It was supposed to, but we’re still waiting. There are multiple sources of data on this. Some experts even talk of “peak trade.”

“That’s the flip side of the coin,” Zarak said. “We’re looking closely at world commerce developments and trying to project in the best way possible what’s going to be the net effect of that.”

What if slower trade is here to stay and the opening of new canal coincides with the end of globalization as we knew it? We’ll look at this from different angles as the week goes on. Find all of our upcoming coverage here.