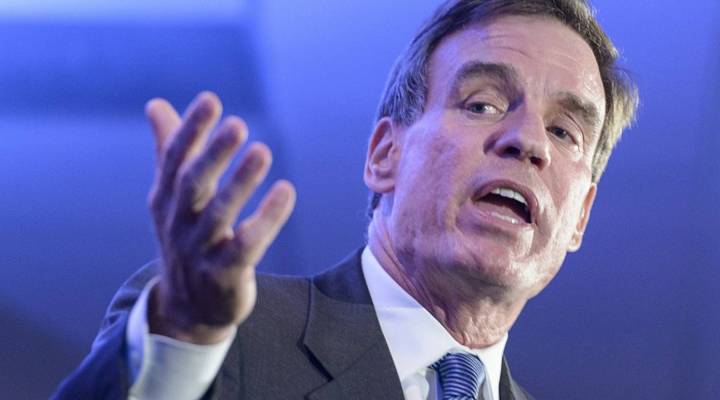 COPY
He believes the way workers are classified and the nature of the relationships between employers and employees needs to change. BRENDAN SMIALOWSKI/AFP/Getty Images
The Price of Profits

He believes the way workers are classified and the nature of the relationships between employers and employees needs to change. BRENDAN SMIALOWSKI/AFP/Getty Images
Listen Now

Sen. Mark Warner, a Democrat from Virginia, has spent a lot of time thinking about work. He believes the way workers are classified and the nature of the relationships between employers and employees needs to change, and he’s being vocal about it. He spoke with Marketplace host Kai Ryssdal.

On what needs to change in today’s economy:

I think we’re going to need to create a different set of worker classifications. I think we’re going to need to create portable benefits that will travel with an individual and so that a small part of your income, no matter what kind of legal classification, a small part would be set aside for health, retirement, disability. We have opportunities to create this, frankly with some of the same technologies that gets that Uber to arrive in front of you, if we think forward leaning and don’t get caught back in this 20th-century binary choice between W-2 and 1099.

Who bears the responsibility to change things?

On the gig economy and the election:

The challenge is both [that] we’re not hearing about the gig economy, we’re not hearing about how we rethink a social contract that worked for 70 years in the 20th century but isn’t fully working in the 21st century. I think both political leaders need to weigh in on this. I think responsible business leaders need to weigh in as well. Just think on the terminology we use. If I invest in a piece of equipment that’s an asset. If I invest in training of someone who works with me, that’s a cost. We need to rethink that whole framework. … it’s time for capitalism 2.0 if we’re going to make sure that we keep an America where everyone feels they’ve got the fair shot that I was lucky enough to have, and I think most of your listeners probably had.