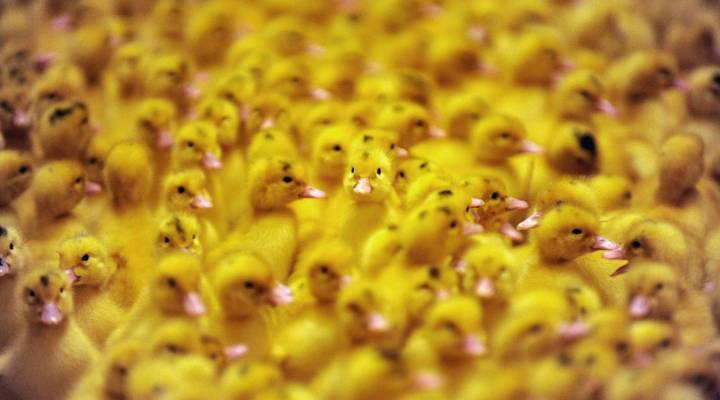 The United Egg Producers plans to end the practice of culling male chicks at laying-hen hatcheries by the year 2020.

The laying industry — farmers who produce the eggs in your refrigerator — has no use for male chicks. But hundreds of millions of them hatch each year in the facilities that breed laying hens. When the male chicks are just a day old, they’re killed.

On one side of the chicken world, there are broilers. They’re bred to grow gigantic over the course of a month. At that point, they’re slaughtered and boom, roast chicken for dinner. Then there are the egg layers. The males of this breed have no purpose.

“So that leaves them as essentially this byproduct of the laying-chicken hatcheries,” said David Coman-Hidy, executive director of the Humane League. He said standard practice is for these day-old chicks to be macerated — essentially killed in a blender or a grinder. But that will become unnecessary thanks to new technology being developed.

A tiny needle will be inserted into an egg’s shell, “and they’ll know very accurately and very early on whether the chick is going to be male or female,” he said.

Think of it as a sort of chicken ultrasound. Instead of hatching, the male eggs can go on to a different fate, being used for vaccine research or pet food.

Egg producers will have to pay for this technology. But Jayson Lusk, agricultural economics professor at Oklahoma State, said there’s a big payoff in the long run: “So that consumers have confidence that animals are well-treated when they buy eggs.”

Although most consumers have no idea that this even happens, Lusk said, it’s smart for egg producers to pledge to end the practice before it becomes an animal-welfare public relations nightmare. That goes a long way, he said, toward keeping Americans’ appetite for eggs high.