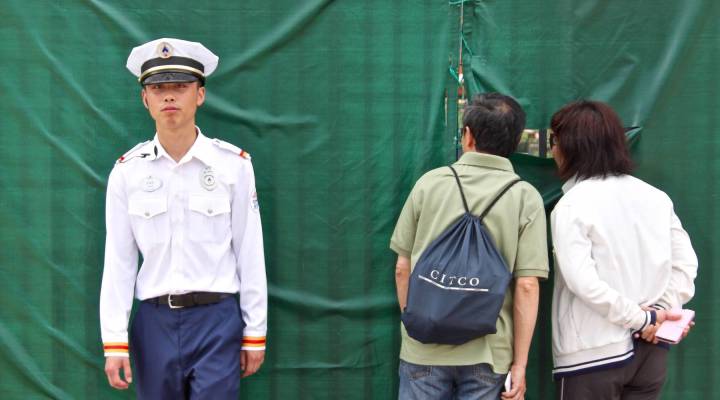 COPY
A Disneyland security guard tolerates visitors' curiosity as they peer through a hole to spy Shanghai's new Disneyland before it opens. Cici Chen/Marketplace

A Disneyland security guard tolerates visitors' curiosity as they peer through a hole to spy Shanghai's new Disneyland before it opens. Cici Chen/Marketplace
Listen Now

The subway from downtown Shanghai to the city’s new Disneyland Park takes an hour and a half.

Or you could travel to the park the way friends Yang Meng and Dong Yixian did: driving hundreds of miles from rural Shanxi province in a cross-country pilgrimage to Mickey and friends.

“It was totally worth it,” said Yang with a smile. “We were at the park from 8 in the morning to 10 at night. When we first entered, we couldn’t stop staring at everything. It’s very well done.”

The two scored tickets for Disneyland Shanghai’s “soft opening” from a friend of a friend who works at the park.

Standing outside the park’s gates, Yang lugs a shopping bag filled with Mickey Mouse teacups and plates, while Dong cradles a stuffed blue Disney character — Stitch, from the movie “Lilo and Stitch” — that’s the size of a baby panda.

Lines outside shops in Disneytown snake around the block — a sign that Disney’s presence in the Middle Kingdom is long overdue.

“You’ve got to look at the economy of a place and say, ‘Are there enough people that have enough money to spend this much to come and do this?’” asks James McGregor, author of “One Billion Customers,” a book about China’s business climate. “China is well beyond that now. I think it’s really going to be a home run.”

While profits at Disney’s parks in the U.S. have surged by 50 percent over the past five years, revenue at its resorts in Hong Kong, Tokyo and Paris has been flat. That’s why investors are hoping the company’s $5.5 billion resort in Shanghai will attract the world’s fastest-growing consumer class — people like Yang and Dong, who drove three days to get there.

The two have just one complaint: “I’d like to come back when there are fewer people,” Dong said. “But I heard when the park officially opens, they’ll let in even more people. I probably won’t come back for a while.”

“Too many people” isn’t an unusual complaint at a Disney park or here, inside the world’s most populated country. But the combination of the two is, for many guests, too much to take.

Visitor Mao Yijun flew from Beijing to see the park. After a day, she said she’s vowed never to return.

“The lines are too long,” Mao complains. “I stood in line for four hours for one ride! I’ve been to Disney’s parks in America, so I’m OK with standing in line, but waiting more than two hours isn’t worth it. Many Chinese, though, have never traveled abroad, so they’ll probably enjoy it no matter how long they wait in line.”

After all, she said, that’s life in China. You stand in line at the market, at the train station, for a subway. If you’re going to waste your time waiting, you might as well be doing it at ‘The Happiest Place on Earth.”