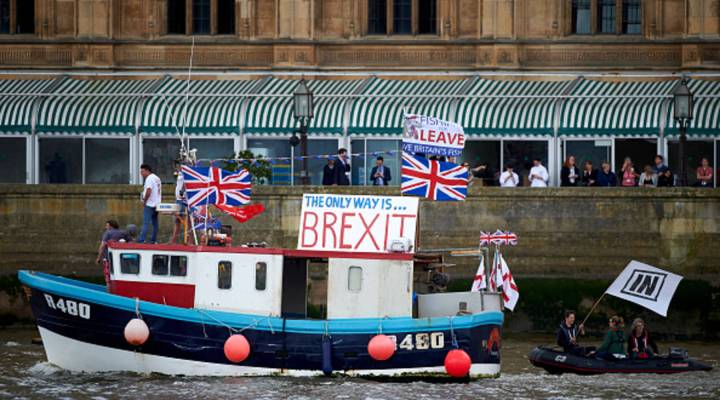 COPY
A Brexit flotilla of fishing boats sails by the British houses of Parliament on the river Thames in London on Wednesday. NIKLAS HALLE'N/AFP/Getty Images
Brexit

A Brexit flotilla of fishing boats sails by the British houses of Parliament on the river Thames in London on Wednesday. NIKLAS HALLE'N/AFP/Getty Images
Listen Now

The news of the global economy today comes out of a little town in Northern England called Birstall, where Jo Cox, a member of Parliament, was attacked and killed. Cox was a supporter of Britain remaining in the European Union.

Her attacker, eyewitnesses said, was shouting “Britain first,” an apparent reference to the referendum next week on whether Britain should stay in the EU or leave.

What does this violence say about the mood in Britain when it comes to the referendum?

Well, if the referendum campaign was indeed the trigger for this attack — we don’t know that for certain yet — this is a very steep and tragic escalation in a certainly fraught and even vitriolic campaign, but not until now a violent one. For this country in particular, this is a terrific shock. This is something that happens very, very, very rarely in the U.K. This explains why this crucial, this critical referendum campaign has been suspended, at least for today and tomorrow.

Is it true that immigration is the top of the list of people’s concerns as opposed to the economics of the EU?

Yes, absolutely. I mean, immigration has been rising up the political agenda in this country for a number of years. But it wasn’t a major issue in the referendum campaign until a couple of weeks ago when the Leave campaigners introduced it and starting emphasizing it in a big way. But it is a source of much controversy and much discontent. … And the dissatisfaction is centered on health care, education and housing. These three sectors, it’s argued, are struggling, are under real pressure because of a big influx of people, particularly from Europe.

Correction: Jo Cox’s name was misspelled in a previous version of this story. Her name has been corrected.