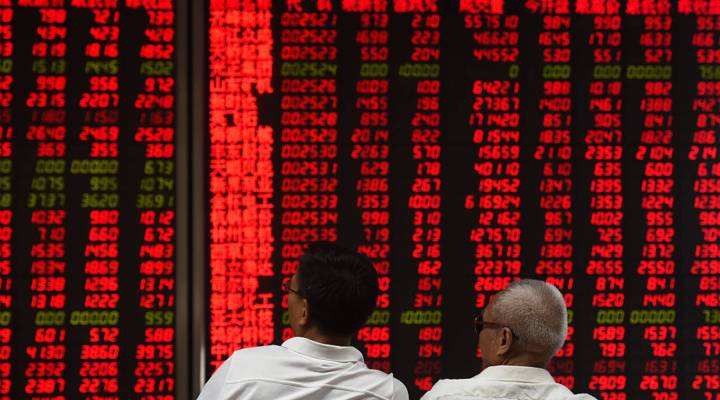 COPY
Investors monitor stock price movements at a securities company in Beijing on June 15, 2016. China on June 15 brushed off stock index firm MSCI's decision to exclude the country's A shares from its influential global equities index, saying that the gauge cannot be complete without the Chinese stocks. GREG BAKER/AFP/Getty Images

Investors monitor stock price movements at a securities company in Beijing on June 15, 2016. China on June 15 brushed off stock index firm MSCI's decision to exclude the country's A shares from its influential global equities index, saying that the gauge cannot be complete without the Chinese stocks. GREG BAKER/AFP/Getty Images
Listen Now

Uncertainty has continued to drive investments from pension funds, insurance companies and foundations away from equities, according to a report from the market tracking company eVestment.

For the 12th consecutive quarter, equity strategies saw net outflows, with $58.6 billion heading out in the first quarter of 2016.

Experts said several instances of global uncertainty have contributed to the drive away from equities.

“We have wars and threats of wars in the Middle East, disruptions in the energy market, we have things going on in South America,” said James Angel, a professor of finance at Georgetown University. “Look around the world. There is no shortage of things to worry about.”

As for what’s caused the recent outflow, Julien Acalin, a research analyst at the Peterson Institute for International Economics, blamed three things: uncertainty in the Federal Reserve’s actions, worries about the Chinese economy and shakeups in the global oil market.

“We had a drop in the oil price during the first quarter of 2016,” Acalin said. “That created, again, uncertainty.”

As investments leave equities, more are ending up in the bond market.

“Bonds tend to do well when economic conditions deteriorate, and over the last four months, the pace of jobs growth has been slowing, and throughout this year, the expectations for inflation have been declining as well,” said Guy LeBas, chief fixed income strategist at Janney Montgomery Scott. “So there is some concern about the strength of the domestic economy, which is driving demand for bonds as well.”

LeBas pointed to inflows of about $6 billion in the Aggregate Bond Market ETF as an indicator of higher demand.

“That’s a lot,” he said. “It’s not hugely abnormal in the history we’ve seen in the last three or four years, but it is a lot of money certainly.”

Bonds tend to do well when the economy deteriorates. Even so, their popularity may not spell the end of growth in the stock market. Scott Wren, senior global equities strategist at the Wells Fargo Investment Institute, said part of the exit from retail investors stems from overall gains.

“I don’t think you’re going to see a lot more money come off in the nearer term, but I think it’s only natural to take a little money out of the market when you’ve had such a good run over the course of the last six years,” Wren said.

Wren said he welcomes indications that people are pulling money out of the market despite near-record gains in the S&P 500.

“The herd, so to speak, is typically wrong, and if a lot of people start taking money out of the market, but the fundamentals as we project them going forward are still good, that tells me that there’s a lot of people that are getting concerned way too early,” Wren said.

He said some investors can make gains by staying invested as others pull out.

“There may be one out in the seventh inning, but basically, you know, there’s some baseball left to be played,” Wren said.

Correction: A previous version of this story misspelled Julien Acalin’s name. The text has been corrected.