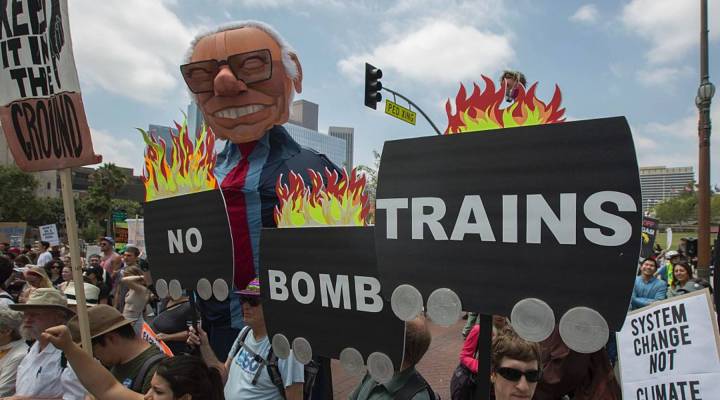 COPY
People protest oil trains, which have a record of explosion and fire disasters, near an over-sized puppet of Democratic presidential candidate Bernie Sanders at the March to Break Free from Fossil Fuels on May 14, 2016 in Los Angeles, California. DAVID MCNEW/AFP/Getty Images

People protest oil trains, which have a record of explosion and fire disasters, near an over-sized puppet of Democratic presidential candidate Bernie Sanders at the March to Break Free from Fossil Fuels on May 14, 2016 in Los Angeles, California. DAVID MCNEW/AFP/Getty Images
Listen Now

The train derailment late last week in Oregon spilled oil and forced evacuations  as oil cars burst into flames and sent thick smoke over the nearby town of Mosier. It also brought attention back to the dangers of transporting crude oil via train.

Trains began rolling again through the site of the wreck even though about a dozen oil-containing tankers from the accident are still off to the side of the track.  Union Pacific resumed train traffic on the line Sunday evening. Justin Jacobs, a spokesman for Union Pacific, said a replaced track, speed reductions and other safety remedies made rail transportation possible.

“Multiple parties have inspected this area as well as the rail system that was replaced and determined that it would be safe,” Jacobs said.

Community members called for a halt to all train traffic until the oil is removed. Brett VandenHeuvel, executive director of a local environmental group Columbia Riverkeeper, posted a video to Youtube last night, showing train cars rumbling past the twisted wreckage of fallen tankers.

“Those cars in the distance still have oil in them, and they’re running trains,” VandenHeuvel says in the video. “It’s unbelievable that they’re sacrificing public safety to get this going. You know, the river’s not cleaned up, the soil’s not cleaned up, the sewage treatment plant doesn’t work, but you know, good gracious, they’re going to start these trains.”

State political leaders  including Oregon Governor Kate Brown called for a temporary moratorium in oil tanker traffic Monday, saying it was too soon to resume those operations safely. Jacobs of Union Pacific said no oil tankers had traveled past the spot by Monday morning, and it was unclear when such traffic would resume.

It’s not known yet what caused the trains to derail. Jacobs said early reports indicate a likely failure in a fastener that connects ties to rails. He said the section of track where the train derailed had passed inspection just days before on May 31.

The oil cars  involved in the accident were an upgraded model. Reached by phone on Monday, VandenHeuvel said  the fact that the cars involved were essentially upgraded versions of old tanker cars, widely seen as unsatisfactory for transporting volatile liquids, degraded his confidence in any oil transport over rail.

Even though the oil cars were upgrades, the CPC-1232 tank cars involved in the accident are set to be phased out of use by 2030, in favor of a new model that features, among other things, thicker shells, heat shielding and improved valves.

An official with the National Transportation Safety Board said few of those new models are in use and that getting more in place will take too much time.

“We are concerned about the fact that it’s a 14-year phase in period,” said Robert Sumwalt, an NTSB board member. “We feel that this phase-in period is a bit long.”

And, Sumwalt said he’s hoping this long phase-in doesn’t get delayed. Those fears may be valid.   Congress extended the deadline to adopt another measure called “positive train control’ until the end of 2018. It  prevents trains for traveling in unsafe ways in order to avoid derailments.

“We don’t want this process to be slow-walked,” Sumwalt said. “We don’t want there to be an extension. We’ve seen this in other aspects of rail. We want to make sure that these tank cars, the newer tank cars, are put into service as soon as possible.