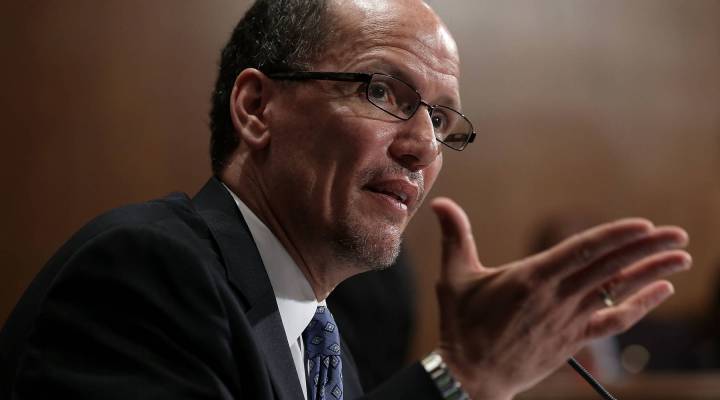 COPY
"In terms of the May report, the damage was done" by the Verizon strike, says U.S. Labor Secretary Tom Perez about low employment numbers.  Alex Wong/Getty Images

"In terms of the May report, the damage was done" by the Verizon strike, says U.S. Labor Secretary Tom Perez about low employment numbers.  Alex Wong/Getty Images
Listen Now

Economic policymakers and market professionals got some news Friday morning that may change the way we’re thinking about the United States economy — for the worse. The May employment figures were released and, with only 38,000 new jobs added to the market, they show a startling departure from forecasts. Forecasters predicted growth of about 160,000 jobs, or nearly four times the reality. Friday’s numbers show the slowest growth since 2010, and are so low that they are likely to negatively skew the year’s trend so far. The unemployment rate, derived not from counting payrolls but from surveying households, shrank to 4.7 percent.

For the perspective from the top, Marketplace Morning Report host David Brancaccio sat down with U.S. Secretary of Labor Tom Perez:

On what went wrong:

A big part of it was the Verizon strike. I anticipated that — that’s why a few weeks ago, I called the parties, invited them to the Labor Department.We spent two weeks together, and we settled the strike. But in terms of the May report, the damage was done, and not only does it have a direct impact on roughly 35,ooo workers, but there is a spillover effect…. That’s part of it, but that’s not all of it. When I look at the history of this recovery, we’ve had eight months during the last six years or so of this recovery when we’ve had job growth of less than 100,000. I think it’s important to recognize that one month doesn’t make a trend, because those months were always followed every time by increases in the ensuing months.

On job growth versus wage growth:

When you get closer to the summit of the mountain of full employment (and we’re not there yet, we’ve still got slack in this economy),  you start to see a tradeoff where you have less jobs created in a given month, but you start to see earnings go up. Average hourly earnings for private employers have increased 3.2 percent at an annual rate so far in 2016. That is much better than 2015 ­— it’s not where we want it to be, but we’re starting to see these upward pressures on wages.

On women in the workforce:

We’re the only industrialized nation on the planet that doesn’t have some sort of federal paid leave, and we’re the only nation on the planet where paid leave is a partisan issue. Conservative and progressive ruling parties across the world understand that paid leave is a huge part of a strategy for economic growth, because when women succeed and families succeed, your country succeeds. We used to have the same female labor force participation rates as Canada, back in 2000, and now we’ve fallen way behind because they have sensible paid leave policies and we don’t. If we had simply kept pace with Canada, we’d  have 5.5 million more women in the workplace, and our labor force participation rates would be up substantially.

On the big picture:

It’s really important to look at the broader picture. What is the other trend data showing? The other trend data shows the following: We’ve had 65 weeks in a row of first-time claims for unemployment insurance under 300,000, which is the longest streak since 1973. We’ve had hourly earnings going up 3.2 percent at an annual rate so far in 2016, which is a good sign. We’re seeing job growth this year of 150,000 jobs per month in 2016, which is lower than 2015, but not unexpectedly so, because we’re getting closer to the top of the mountain. When you get closer to top of the mountain, the steps every month are going to be shorter, but they’re going to be accompanied by the wage growth that we’re seeing. We’re not where we need to be, but when you look at this broader picture … it tells us that the basic fundamentals continue to be moving in the right direction.