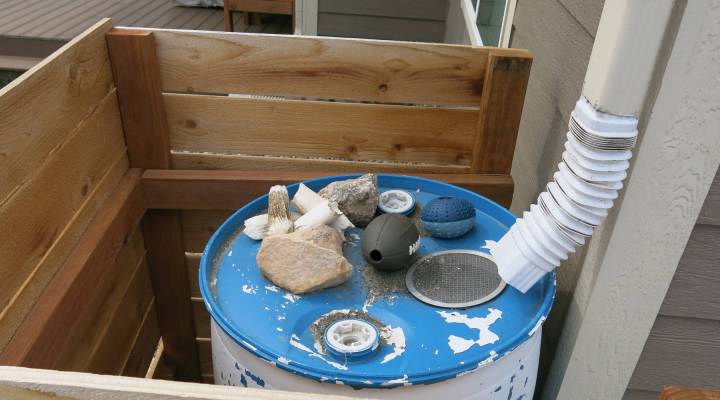 Rain barrels are used to collect water that falls off into a home’s gutter system, and usually store between 40 and 60 gallons. In Colorado, their use has been illegal for decades. Luke Runyon/KUNC and Harvest Public Media

Rain barrels are used to collect water that falls off into a home’s gutter system, and usually store between 40 and 60 gallons. In Colorado, their use has been illegal for decades. Luke Runyon/KUNC and Harvest Public Media

On quiet streets, in unsuspecting Colorado neighborhoods, among retirees and young families, illegal activity has been running rampant.

Rogue water bandits are the culprits. What’s worse, many of the scofflaws may not even know they’ve been breaking the law.

The theft takes place in an unlikely location: inside rain barrels found among backyard flower and vegetable gardens. The problem is so widespread it sparked a debate at the state capitol over the massive, complex system the state uses to divvy up water for cities, farmers and factories.

One of the desperadoes is Katie Abrams, who lives in a ranch-style home in Fort Collins.

“It’s behind there, in that little makeshift wooden contraption that we’ve put around it, mostly just because it was ugly,” she said of her backyard contraband: a blue and white plastic drum attached to the home’s gutter.

For decades in Colorado, using a 50-gallon drum to store the rainwater that falls off your roof has been against the law. Abrams mostly uses hers to water the flowers in the front yard. She brought it with her when she moved to Colorado from Illinois, unaware she was transporting illegal cargo across state lines.

“Water’s a big concern out here in the West and [I was] thinking it would be encouraged here,” she said. “To find out that actually it’s illegal was kind of shocking.”

Katie Abrams’ backyard in Fort Collins, Colorado, has been a hotbed of illegal activity, where she irrigates her landscaping with a rain barrel water.

The Colorado Constitution lays out the foundation for the state’s frontier-era water system. In short, water is delivered to users, like farmers and cities, based on when they purchased their water rights. It’s the so-called “first in time, first in right” doctrine. Opponents of the vessels say homeowners who keep the rainwater undermine this sacred, fundamental creed on which decades of water case law have been built.

“There is an impact. We know that there’s an impact,” State Sen. Jerry Sonnenberg said, a Republican from a mostly rural district on the state’s eastern plains and outspoken critic of rain barrels.

After a failed attempt to legalize the barrels, proponents brought the legislation back to life in 2016. Lawmakers passed the bill, HB 16-1005, and Gov. John Hickenlooper signed it, making smaller rain barrels legal. Homeowners will be allowed two barrels per property, with a combined capacity of no more than 110 gallons.

Sonnenberg voted against it, saying rain barrels have the potential to steal water from rightful users further downstream.

“Anybody that does simple math knows that if you have 10 gallons and you hold up another gallon to use somewhere else where it normally wouldn’t have been used, that is a change to the math and how that goes down the river,” Sonnenberg said.

“The question is, how much of an impact is that?”

That question is what drove the debate during the 2016 legislative session. Proponents say the impact is minimal, that barrels hold just a drop in the proverbial bucket. Opponents say rain barrels sneakily erode the state’s fundamental water law, and to pick away at its protections for water right holders is dangerous.

“I could see it being viewed as, ‘Oh it’s those city slickers, coming to take what’s not theirs,’ and I think that’s a real concern as expressed by the downstream water right users,” Beckwith said.

But that concern is more of a philosophical one, and rain barrels just happen to be a convenient proxy for larger water use angst, Beckwith added.

“I don’t think there is actual harm from these small, residential rain barrels. If you’re talking several thousand gallon tanks at big properties, OK, I can understand that. But not for these small rain barrels.”

Beckwith doubts there will be a rush on rain barrels given their impending legality, but even if legions of backyard gardeners turned to using them, the amount would still be small.

“Fundamentally, it’s never been about the actual water savings,” Beckwith said. “It’s about the fact that someone with a rain barrel begins to pay more attention to when it rains and when it doesn’t rain, and they begin to understand that water is a limited resource, and that act of managing your own water builds your own conservation ethic. Really, it’s a tool to build a conservation ethic in the urban centers.”