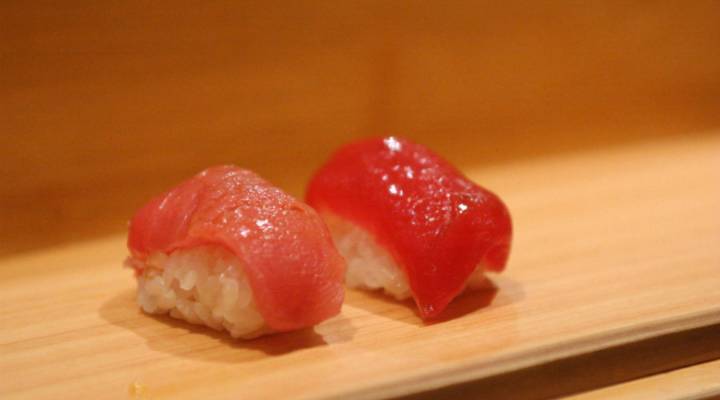 COPY
A dish at Sushi Yasuda in New York, a restaurant with service-included prices. gandhu/Flickr

A dish at Sushi Yasuda in New York, a restaurant with service-included prices. gandhu/Flickr
Listen Now

How much to tip? Figuring between 10, 15, 20 percent, or extra for extra excellent service is one decision. But when it comes to haggling over the percentage of a gratuity, the choice is no longer solely in the hands of diners.

Recently, restaurateurs from New York to San Francisco have been experimenting with including the tip in the cost of the meal. And to complicate matters even more, some of those same venues, like Joe’s Crab Shack, a national chain, are now reverting to the old method – letting customers decide how much to tip.

So, forget the percentage: Should the tip be included, or, not? At Freek’s Mill, a small-plates restaurant in Brooklyn, New York, diner Suzanne Kaminski says yes.

“Just because it’s so nice,” she said, “you know what you’re paying for.” In this case, a dinner including steak tartare and rabbit pappardelle, gratuity included. Freek’s Mill opened just five weeks ago. The prices listed on the restaurant’s menus include the tip.

But her husband, Joe Kaminski, seated across from her, is quick to point out that there are two sides to the coin:“If you get a bad waiter, and you don’t like him, then what can you do?”

It’s possible that concerns of diners like these are what’s behind the latest trend, or reversal thereof. In addition to Joe’s Crab Shack, some small restaurants that had tried including the tip in prices for dishes listed on their menus have begun stepping back.

Russell Winer a professor of marketing at NYU’s Stern School of Business, said diners like to feel like they’re in charge, and taking the tip out of their hands — literally — may not make them feel at ease. “People like the discretion,” he said. “They like the separation of the tip from the meal because it gives them the opportunity to reward excellent service and penalize terrible service.”

Diners want to know where their money is going. Preferably into the hands of the waitstaff, not the owners.

But when it comes to including gratuities, Winer said the biggest issue by far is how we perceive prices. Imagine reading the price on a menu for a steak, first before and then after it includes the tip.

“It looks more expensive right? What used to be a $30 meal now looks like a $36 entree,” Winer said.

Even though we know at the end of the meal the price will be the same, including the tip up front can still make it feel more expensive. A lot of the problem with including the tip can come down to perception.

“For upscale restaurants, the waitstaff can be very highly paid. From tips. When you stop that process, the waitstaff may be less motivated, but it’s also possible that customers will perceive the waitstaff to be less motivated,”  said Maurice Schweitzer, a professor of operations, information and decisions at the University of Pennsylvania’s Wharton school. “We’ve all had great experiences and less good experiences in restaurants. And if you have a less good experience in a restaurant that’s stopped tipping, it’s easy to make the attribution that, ‘Oh, they weren’t really trying because they weren’t getting tipped.'”

But most of the diners who spoke to a reporter at Freek’s Mill shared the opinion of Spencer Finch, who, as he ordered dinner, said he appreciates the new policy.

“I ate here once before,” he said, “and I like that you don’t have to do the math at the end of the meal, after you’ve had a few drinks, which always makes me anxious.”